2nd T20: England should be mighty pleased with number of players putting their hands up

After the impressive win in the first T20 at Dubai against Pakistan, England should be mighty pleased that they pulled off a victory in the second game as well, to clinch the T20 series with a match in hand

After the impressive win in the first T20 at Dubai against Pakistan, England should be mighty pleased that they pulled off a victory in the second game as well, to clinch the T20 series with a match in hand. The victory was a massive triumph considering, till not long ago, it was believed that England hadn’t woken up to the potential of T20 cricket. But, over the last two games, the Englishmen have definitely proved that they have the ability to compete against dangerous opponents in the shortest format of the sport.

What will please England most about the two wins is that the achieved it even while changing the personnel in their endeavour to get things right for the World T20. In spite of the series not yet won, England decided to keep out skipper Eoin Morgan, Moeen Ali, Chris Jordan and Reece Topley from the match. For the second match in a row, James Vince was highly impressive. His consistent performances in the series will make it difficult for the selectors to ignore him as they sit down to finalise the team for the World T20. 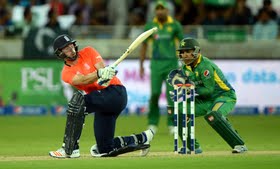 In the absence of Morgan, Jos Buttler was handed the responsibility of leadership, and he made a memorable start to the same. Buttler smashed 33 from 22 balls with three fours and a six, which played a significant part in England finishing with a challenging total batting first. The whirlwind knock was continued evidence of the fact that Buttler has regained his form and confidence back after a slide, and that can only be good news for England, and bad for the opposition. Buttler contributed behind the stumps as well, effecting two run outs although it will be too early to comment on his leadership.

Opener Jason Roy and Joe Root also made 20s early in the innings to give the team some much-needed batting momentum. In a 20-over clash, some knocks can also prove significant. With the ball as well, England were good. Liam Plunkett, for the second game in a row, stood out. As and when England needed a wicket, Buttler looked up to him, and the fast bowler did not disappoint. After quite a number of years away from the T20 arena, Plunkett has made a commendable return. England should also be enthused with the efforts of Adil Rashid, who kept things extremely tight, and claimed wickets as well.

Although the margin of defeat was only three runs in the end, Pakistan were the second best team for most part of the match. Only some scintillating hitting from Shahid Afridi and Sarfraz Ahmed brought them that close in the end. Once again, Pakistan’s fielding let them down. Sohail Tanvir dropped two chances, and one of them, that of Vince, proved to be game changing as the batsman went on to thrash two fours and a six immediately after being reprieved. Also, their top four batsmen all got 20s, but they needed at least one of them to carry on.