Toss: KKR have won the toss and they are going to bowl first

Kallis made 19 runs from 20 balls, that costs match to KKR now, it make sense it the target is around 140 to 150, but he is just not good enough for these high scoring contests.

Good win for CSK, and a brilliant last over from Morris. But I hope they will not ignore the issues theys till have with their death bowling. That was absolute trash from Nannes and some ordinary stuff from Bravo. 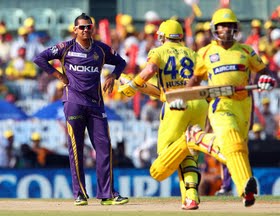 Looks like Murali Vijay has been dropped, we will confirm it in a moment. Saha replaces Vijay for Chennai.

MS Dhoni: 'I wanted to bat first, we do not trust the wicket too much. It is always about playing good cricket, this is just another game for us. It will be slightly more hot and humid considering it is a 4 PM start. Nannes is fit and will play, we have another change.'

Gambhir: 'We will bowl. The wicket will not change that much, we will look to restrict them. It was a good win in our last match, we will look to continue playing well. I am not thinking about last season, this is a new season. Chennai always have a good batting track, hopefully, we will perform well today. Brendon McCullum gets his first match and Shami Ahmed is in for Ladda.'

Chennai Super Kings are second on the table and are cruising ahead, while Knight Riders are still struggling to take off. They are seventh on the table at the halfway stage and need a massive turnaround in the remaining matches to finish in the top four.

Suresh Raina is one short of becoming the second batsman to hit 100 sixes in the IPL.

Dwayne Bravo and Sunil Narine have both taken 14 wickets this season. But whereas Narine bowls at an economy rate of 5.65, Bravo is expensive at 8.47