Another chapter will be added to cricket's oldest rivalry as hosts England and defending champions Australia come face to face in match number 32 of World Cup 2019 at the hallowed Lord's surface tomorrow.

England goes into the match having suffered a setback of sorts, losing to unfancied Sri Lanka by 20 runs in their previous encounter. This comes after their shock loss to another Asian side, Pakistan, early in the tournament. As such, the hosts would be under pressure to get back to winning ways.

Australia, in contrast, has suffered only one loss against India. Since, they have been steamrolling opponents one after the other, Bangladesh, against whom they notched up 380 plus, being the latest. With five wins from six matches, a semi-final spot seems to be for the taking. 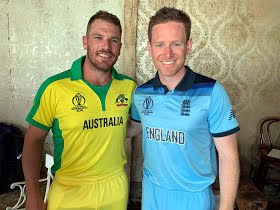 While it is too early for England to worry, the unavailability of in-form opener Jason Roy due to a hamstring injury is a definite concern. James Vince, as he has done throughout his short international career, is failing to make the most of his golden opportunities. Their batting, apart from Ben Stokes, was found out chasing, which means there is a weak link in the otherwise strong batting line-up.

If you look at England's batting, they have the likes of Eoin Morgan, Joe Root, and Jos Buttler, all of whom have been in quite an impressive form, the first two in particular. Buttler scored a hundred the last time these two teams met. He would be confident of shining again. The English bowlers have done a reasonable job, with Chris Woakes, Jofra Archer, Mark Wood, and Adil Rashid all making contributions.

The Aussie openers have been in sensational form, with both David Warner and Aaron Finch scoring runs by the gallons. Warner did not begin the season high on confidence though he was making runs. But, as the games have progressed, he has really come into his own. Steve Smith to has played a couple of impressive knocks. However, the middle-order, including the dangerous Glenn Maxwell, hasn't had much to do.

The previous match also saw all-rounder Marcus Stoinis return to the team and make an instant impact with 2 for 54. Pat Cummins and Mitchell Starc have brought all their experience into play and have ensured the bowling has been in fine form. England, however, has won nine of the last ten contests between the two sides. Australia would thus be keen to set the record straight.