Australian players sucked up to India and Kohli with IPL contracts in mind: Clarke

Former Australian captain Michael Clarke has claimed that Australian players of recent times have refrained from sledging Indians, particularly skipper Virat Kohli, as they were mindful of their Indian Premier League (IPL) contracts.

Clarke, who captained Australia to World Cup glory at home in 2015, added that most other teams in world cricket also 'sucked up' to India for the very same reason. According to him, Australian players for a while were scared to have verbal duels with India as they feared about their lucrative IPL contracts. 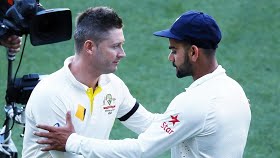 "Everybody knows how powerful India are in regards to the financial part of the game, internationally or domestically with the IPL," Clarke told Big Sports Breakfast.

"I feel that Australian cricket, and probably every other team over a little period, went the opposite and actually sucked up to India. They were too scared to sledge Kohli or the other Indian players because they had to play with them in April.

"Name a list of 10 players and they are bidding for these Australian players to get into their IPL team. The players were like: 'I'm not going to sledge Kohli, I want him to pick me for Bangalore so I can make my $1 million US for my six weeks'.

"I feel like that's where Australia went through that little phase where our cricket became a little bit softer or not as hard as we're accustomed to seeing," Clarke felt.

Australian players have over the years earned huge contracts with IPL franchises. Last year as well the auction saw a number of Aussies walking away with hefty pay packets. Australian fast bowler Pat Cummins, in fact, broke the record for the most expensive foreign buy. He was purchased by Kolkata Knight Riders for Rs 15.5 crore.

Kohli and Australian cricket have shared a love-hate relationship. Recently, Australian coach Justin Langer revealed that he felt like a punching bag as Aussies could not respond to Kohli's verbal barbs and aggression during the 2018-19 series as the hosts were reeling under the ball-tampering controversy.

Kohli even criticised Steve Smith openly after the brain fade incident in 2017. However, he also won hearts for asking fans not to boo but applaud Smith during the World Cup 2019 clash between the teams. The same gesture also won him an ICC Spirit of Cricket award.