South Africa and New Zealand get into ODI mode

After the two match T20 series that was tied 1-1, South Africa and New Zealand will now face off in the three-match one-day series, beginning with the first ODI at the SuperSport Park in Centurion on Wednesday.

After the two match T20 series that was tied 1-1, South Africa and New Zealand will now face off in the three-match one-day series, beginning with the first ODI at the SuperSport Park in Centurion on Wednesday. The T20s followed a similar pattern with South Africa putting up an excellent batting show in the first match and the Kiwis responding with flair in the second. The visitors would like to believe that they have the rhythm since they tasted victory in the most recent encounter between the teams. But, these days, with so much cricket being played, form and momentum can be misconstrued. 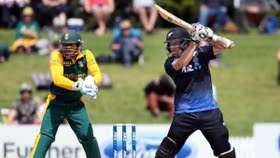 The first ODI of the series will be significant in the sense that it will be the first time the two teams meet each other in the format since the spectacular World Cup semi-final clash between the two sides. That match was a heartbreak for South Africa, very much on the lines of the 1999 Edgbaston semi-final. While not much can be done about that result now, and some water has also flown under the bridge since. But, South Africa can only hope that the disappointment is not at the back of their mind as they head into the match. Carrying the baggage of the past can prove disastrous.

Although some star players from either side are missing, there are a few who can have a significant bearing on the outcome of the series. For South Africa, the biggest of all will without doubt be AB de Villiers. No matter what format or where they play, South Africa have now become highly dependent on their master blaster, if you can call him so. The South African captain had a mixed time of it in the T20s, as South Africa gave away the 1-0 lead. He would thus be keen to make amends, and set things in order in the one-dayers. The Proteas would also be dying to see Hashim Amla in full flow.

With Faf du Plessis being ruled out of the series, they will need their other batsmen to put their hands. Farhaan Behardein will be one of them. With Quinton de Kock out of form, the Proteas are likely to continue with the services of the recalled Morne van Wyk. In the bowling, Dale Steyn will be the key, with the unpredictable Vernon Philander expected to give him company. The likes of Kagiso Rabada, Kyle Abbott in the pace bowling department, and Imran Tahir and Aaron Phangiso in the spin department are likely to come in handy. In fact, bowling is one department where South Africa have an edge over the Kiwis.

New Zealand are likely to depend more on their batsmen in their endeavour to succeed. In the absence of Brendon McCullum, the performance of Martin Guptill will be crucial. The opener got a fifty in the second T20, so he will be in a positive frame of mind. Kane Williamson will without doubt have a crucial role to play along with big hitters like Luke Ronchi, Grant Elliott and James Neesham. Although New Zealand's bowling, as mentioned earlier, is on the weaker side, they would still expect good performances from the likes of Matt Henry, Mitchell McClenaghan and Ish Sodhi among others.