England headed into the final Ashes Test at Sydney extremely low on confidence in no uncertain terms. Still, fans would have hoped that they showed some fight of sorts in the New Year.

England headed into the final Ashes Test at Sydney extremely low on confidence in no uncertain terms. Still, fans would have hoped that they showed some fight of sorts in the New Year. However, nothing of that was visible from the England side. On the contrary, they reserved their best for the last, a conclusion which is visible from the fact that Australia sealed the Test inside three days. The visitors arrived in Australia with lots of confidence and three back-to-back Ashes triumphs, but it all came down to naught as they faltered miserably. 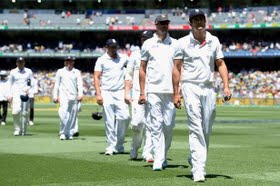 Like in the previous four Tests, England had their chance to dominate in this match as well. However, for the umpteenth time in the series, they blew away great opportunities. In a sense, England lost the battle within themselves on day one itself. Right through the series they had been looking at an opportunity to express themselves. They got their best chance when they had the hosts five down for 97 on the opening day. The ruthlessness expected of a top side was however missing in England’s bowlers, and once they allowed Australia’s lower order to fight back, England were always going to struggle.

Batting has been England’s biggest bane in the series, and after Australia posted a challenging score in the first innings, it was always going to be an uphill battle for the batsmen. The English batsmen, to be honest, were just not up to it. The top five England batsmen were dismissed for single figure scores, a clear illustration of how poorly they batted. The match was pretty much over then and there. The lower order did show some fight, but irreparable damage had been done by then. A 5-0 drubbing was a mere formality once England were cleaned up for 155.

Poor batting was indeed what led to England’s downfall in the game. The scores of their top six in both the innings were symptomatic of England’s woes. Cook made 7 in both innings, Carberry made 0 and 43, Bell made 2 and 16, Pietersen made 3 and 6, Gary Ballance 18 and 7, and Ben Stokes 47 and 32. Not a single England batsman crossed the half-century mark, as a result of which England were never in the contest. Most of the above-mentioned players are established names, which signifies that the visitors were totally outplayed.

Australia, in contrast, made their chances count on every possible occasion. Steven Smith and Brad Haddin played superb knocks on the opening day to rescue the team from a precarious situation. Once Australia had put up a challenging score, the bowlers contributed to put England on the back foot. Ryan Harris was superb in both the innings, and his wickets (eight in the match) were crucial in keeping England down on the mat. Mitchell Johnson carried on his awesome run even as Peter Siddle played the support act to perfection. As he has done throughout the series, Nathan Lyon chipped in when needed and England threw in the towel.