West Indies thrashed Pakistan by 84 runs to storm into the Semi Finals of the ICC World T20 2014. Windies will take on Sri Lanka in the 1st Semi Final on April 3rd at Mirpur.

West Indies thrashed Pakistan by 84 runs to storm into the Semi Finals of the ICC World T20 2014. Windies will take on Sri Lanka in the 1st Semi Final on April 3rd at Mirpur.

It was an incredible performance from the West Indies. Batting first, the West Indies were struggling at 81 for 5 by the 14th over. Mohammad Hafeez delivered the first blow when he had Chris Gayle stumped out in the 3rd over. Sohail Tanvir got Dwayne Smith caught behind in the 4th over.

Lendl Simmons scored 31 from 29 balls before he was run out by a direct throw from Umar Gul. Shahid Afridi after a couple of close lbw shouts finally got Marlon Samuels bowled for 20 (from 18 balls).

Pakistani spinners were all over the West Indian batsmen but the pair of Dwayne Bravo and Darren Sammy held their nerve to turn things around. Bravo started the onslaught smashing Umar Gul for a big over. Saeed Ajmal and Sohail Tanvir were targeted next and West Indies ended up plundering more than 80 runs in the last five overs! 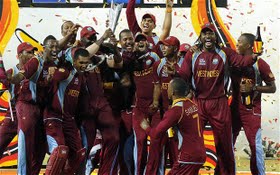 Few people gave Pakistan any chance to score that target as their batting is known to crumble under pressure. Pakistan played according to the expectations and in the very first ball of the innings saw a toe crushing yorker from Krishmar Santokie got rid of last match centurion Ahmed Shehzad for a duck!

The Akmal brothers – Kamran and Umar fell trying to attack Samuel Badree leaving Pak at 9 for 3 in 4 overs. Shoaib Malik continued to fail as he got stumped out off Badree. The match was sealed for sure by the Windies when Skipper Hafeez when he was caught by Gayle at covers leaving his team at 37 for 5 in the 11th over.

Pakistan had no chances for any miracles and they finished at 82 all out in 17.5 overs. Badreen and Narine took three wickets each. Bravo was the Man of the Match for his great knock.

Toss and Teams: West Indies have won the toss and elected to bat first in their crucial match against Pakistan at Mirpur. The winner of this match will face Sri Lanka in the Semi Finals on the 4th of this month.