Have India already lost the series in their minds?

Okay. This statement of mine may backfire miserably. India may manage to stage an incredible fightback and go on to clinch the series as well. Like in 2001, they may find new heroes like VVS Laxman and Harbhajan Singh.

Okay. This statement of mine may backfire miserably. India may manage to stage an incredible fightback and go on to clinch the series as well. Like in 2001, they may find new heroes like VVS Laxman and Harbhajan Singh. After all, the Eden Gardens is the same venue where India performed that miraculous comeback against the all-conquering Australians. But, that seems like a far-fetched dream for India do not have players of that calibre in the team even though Harbhajan is still around. Also, from what has been on show at Mumbai and at Kolkata so far, the signs aren’t encouraging. 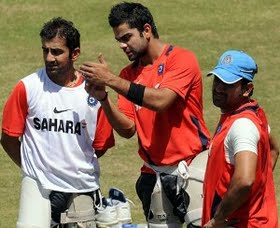 The fact that skipper Dhoni has been talking more about the pitch rather than the performance (or rather non-performance) of his players is a clear cut indication of India’s negative mindset. If there were any doubts over the same, everything was out in the open at Mumbai. Dhoni demanded for a rank turner at Wankhede, got it, and we all saw what the result was – nothing short of a disaster. In contrast, he did not make any demands for the earlier Test at Motera. India won the same, yet something was rankling him. The moment he asked for rank turners, he lost a lot of respect in world cricket and, who knows, he may have handed over the series to England on a platter.

The manner in which some of India’s well-set batsmen were dismissed on the opening day at Eden Gardens reiterated that all is not well with the Indian team. Dhoni won the toss, their batsmen were presented with a flat track, yet they managed to lose seven wickets. Virender Sehwag’s run out was the worst thing that could have happened to the team at the start of a Test, on such an easy pitch to bat on. It was an early symptom of the ills in the Indian team, lack of co-ordination among the team members. The number of rifts in the team is very much out in the open, and it is pretty much showing in their every performance.

Gautam Gambhir has been having a strange time. He’s got a number of starts in the series, but each time he has found a way to get out. On Wednesday, India dearly needed him to carry on to a bigger score. But, the manner in which he was dismissed, it seemed he wasn’t set at all in spite of facing 124 balls. The Gambhir of a couple of seasons back would have eased to his century on a tougher track. His dismissal once again brought to the fore that his problems are more mental than technique related, which is how it is being made out to be. One cannot blame Cheteshwar Pujara for a couple for failures, and neither should one find fault with Virat Kohli for he singlehandedly shouldered the burden of India’s batting throughout the last year. Of course he can, and should improve, on his shot selection.

India’s poor efforts in recent times should be put down to the failures of their seniors, none more than skipper Dhoni himself. Does he have it in him to stage an Eden-esque turnaround? Sounds a distant possibility.