The match between Mumbai Indians and Royal Challengers Bangalore at the Wankhede Stadium on Wednesday was expected to be a high scoring one, and it did turn out to be so. But, Mumbai won the big moments in the match and, it eventually resulted, in much-needed victory for the hosts.

The match between Mumbai Indians and Royal Challengers Bangalore at the Wankhede Stadium on Wednesday was expected to be a high scoring one, and it did turn out to be so. But, Mumbai won the big moments in the match and, it eventually resulted, in much-needed victory for the hosts. Bowling first, they were staring at a 200-plus target as Virat Kohli and AB de Villiers again sped away. But, Mumbai were successful in pulling things back towards the end. With the bat, they got off to a bright start before stuttering mid-way. Again, the middle order came to their rescue as Mumbai kept Bangalore at bay.

Among the most significant phases of the match was the one in which the well-set, and dangerous looking de Villiers and Kohli were dismissed very close to each other. Krunal Pandya was responsible for the shift in Mumbai's fortunes as he sent back both of Bangalore's big names in the same over. In a matter of a few deliveries, RCB slipped from 91 for 1 to 93 for 3. There was another big blow for the visitors as Shane Watson also fell soon sent back by Jasprit Bumrah. More than the number of wickets, it was the men who fell that hurt Bangalore's charge. Travis Head and Sarfaraz Khan batted well to help the team recover, but a majority of the damage had already been done.

Mumbai's bowlers would have been under severe pressure considering the strong batting line up they were against. But, they did impressively well to restrict the opponents to under 200. Even though Chris Gayle wasn't in form, they would still consider themselves lucky that he wasn't playing for it was at Wankhede that he made that splendid hundred against England in the World T20. Lokesh Rahul, opening in his absence, had quite a struggle. For Mumbai, Pandya was undoubtedly the standout bowler as he picked up the two scalps that made the major difference. The hosts would also have been pleased to see Jasprit Bumrah get back among the wickets.

Although Mumbai restricted Bangalore to a gettable total, they would still have been worried about the chase, for their batting hasn't delivered this season, but for that one match against KKR. But, there was a big similarity in that match and Wednesday's clash. Both times Mumbai were chasing a tough target, and both times Rohit Sharma took charge of the chase. Mumbai certainly are a different batting outfit while chasing. Skipper Rohit sensibly sent himself back at the top of the order, and the move worked as he played a match-winning knock. There were good supporting acts from Ambati Rayudu and Jos Buttler. But, Mumbai would be most pleased with Kieron Pollard's blistering knock to seal victory for the team. 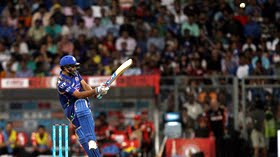 Bowling has been Bangalore's weak point in this IPL, and it was again found out, as they could not put any pressure on the opponents despite defending a challenging score. Varun Aaron and Kane Richardson opened the bowling, but they were easily taken for runs. For a change, even Watson could not make an impact, which made matters worse for Kohli. Iqbal Abdulla was among the wickets, but he gave away runs as well. For a brief while, Bangalore were in the game when Rohit and Rayudu were dismissed. But, their inability to keep Buttler and Pollard quiet took the match away from them.