DD Vs SRH: Daredevils put up a terrible batting performance

It’s official now. Delhi Daredevils have been knocked out of Indian Premier League 6 (IPL 6). Anyways, there were only slim chances of them staying in contention for the last four considering the losing streak, that never seemed to end, they hit at the start of the tournament.

It’s official now. Delhi Daredevils have been knocked out of Indian Premier League 6 (IPL 6). Anyways, there were only slim chances of them staying in contention for the last four considering the losing streak, that never seemed to end, they hit at the start of the tournament. At the same time, a couple of impressive victories in recent times raised faint hopes of them staying in the race, albeit an outside chance. However, in needed only one poor performance on Saturday to sink all those. And so, yet again, Delhi have flattered to deceive.

Against Sunrisers Hyderabad at Uppal on Saturday, their disastrous batting was solely responsible for Delhi’s embarrassing loss. Batting first, they needed a positive start from their openers Virender Sehwag and Mahela Jayawardene, but the struggles of these experienced men continued, and with it those of Delhi. The lack of confidence in Delhi’s batting outfit can be gaged from the stat that not a single batsman managed to make it to the 20’s. Yes, there were some dodgy decisions, but Delhi did not help their cause. A lot of their batsmen played poor shots; others looked completely at sea against Hyderabad’s bowlers. 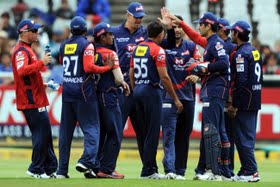 To their credit, all the Hyderabad bowlers were top class, never allowing Delhi to build any sort of momentum. Ishant Sharma, who has been surprisingly effective this season, began things on a positive note for the hosts, trapping opposition skipper Mahela Jayawardene lbw. Things only got worse for the visiting side from there onwards. Dale Steyn continued with his fiery ways. While the batsmen found it difficult to get him away, he also made the task doubly difficult for Delhi, chipping in with the wickets of Unmukt Chand and Irfan Pathan. Thisara Perera, Amit Mishra and Karan Sharma chipped in with wickets as well while being economical.

The star of the match for Hyderabad was undoubtedly West Indian skipper Darren Sammy. He grabbed the big scalp of Virender Sehwag, added that of Jeevan Mendis to his kitty, and also had a hand in a run out. Later in the innings, when Hyderabad found themselves in a spot of bother with the ball, he came in and smashed a couple of big hits to take the hosts home safely. With his match-winning all-round effort, Sammy once again showed his value to the side, and also reiterated how unfairly underrated he is at the international level. Hopefully things will change soon.

Though the target was small, Shikhar Dhawan’s blazing cameo at the start of the innings was crucial since it took away any faint hopes Delhi had of making a surprise comeback. As for the Delhi bowlers, it would be unfair to comment on their performance since their batsman did not give them any kind of a score to defend. They tried hard to their credit, but it was never going to be enough. Delhi ended up disappointing yet again, and the owners would definitely be pondering what to do with the franchise the next season.