Hamilton ODI review: Kiwi bowlers were too good for Aussies

A target of 250 is rarely defended in one-day cricket during modern times as Powerplays and field restrictions have take over. But, New Zealand's bowlers managed to achieved the same in the third ODI against Australia at Hamilton

A target of 250 is rarely defended in one-day cricket during modern times as Powerplays and field restrictions have take over. But, New Zealand's bowlers managed to achieved the same in the third ODI against Australia at Hamilton, in the process clinching the series 2-1, and giving their skipper Brendon McCullum a fond farewell in one-day cricket. It was an excellent all-round effort from the New Zealand bowlers, coupled by the exceedingly poor form of the Aussie middle-order, which cost the visitors the series, their second loss in a row after being thrashed 3-0 by India at home in the T20s. McCullum couldn't have asked for a better one-day farewell.
Considering that Australia's middle-order has been woefully out of form, the somewhat controversial dismissal of the in-form Mitchell Marsh proved to be a massive moment in the match. On 41, and looking good for a lot more, Marsh hit one back to Matt Henry. At first glance, it seemed like the ball hit the boot, and the ground before being taken by Henry. As such, New Zealand's appeal too was very casual. But, the big screen showed otherwise. The onfield umpires then decided to consult the TV umpire and, eventually, the correct decision was made. Considering the circumstances under which the decision was given, Marsh was naturally upset while the Australian camp was a bit dazed. 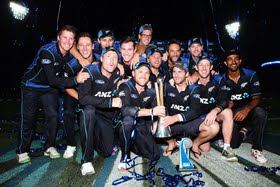 How crucial that moment in the game was, was soon to be known, as Australia crumbled to defeat exactly 10 overs later. Whether Australia were unlucky with the Marsh dismissal remains debatable, but there can be no two ways about the fact that their batsmen let them down once again. Yes, the pitch was slightly slow in nature, but Australia should still have done better especially after the kind of rollicking start they got. They lacked the one significant innings that took them home though. Usman Khawaja again looked in fine form, but fell before fifty. Steven Smith and George Bailey wasted starts while Glenn Maxwell's horror run continued.
Even without two of their key bowlers, Trent Boult and Mitchell Santner, who were ruled out through injury, New Zealand still managed to produce a commanding bowling effort, a tribute to their skills at home. Henry was in wicket-taking form again, with his three scalps, although he went for a few runs. But, Ish Sodhi made an instant impact with the big wickets of Maxwell and Smith. There were excellent spells from Corey Anderson and Doug Bracewell as well, during which they completely stifled the Aussie batting. The visitors could never really recover once they began losing the momentum.
New Zealand's batsmen themselves weren't too smart as they went about setting the target. In his farewell ODI, McCullum got the team off to the mandatory whirlwind start before perishing by the sword. Once McCullum fell, New Zealand failed to maintain the tempo. But, they suffered most because their batsmen could not build on the fantastic start. Martin Guptill and Grant Elliott both got to their respective half-centuries but could not carry on. The rest fared even worse as Australia fought back courtesy probing spells by most of their bowlers. Getting New Zealand all out for under 250 was an impressive achievement. Alas, it wasn't enough for Australia to spoil McCullum's farewell party.
--By A Cricket Analyst