Virat Kohli’s Royal Challengers Bangalore will take on Zaheer Khan’s Delhi Daredevils in match number 56 of the Indian Premier League at Raipur. The match is going to be a do-or-die encounter as the winner will be assured of qualification. In 13 games, Royal Challengers have 14 points, and are in third position. On the other hand, Delhi also have the same number of points, but they are in fifth position due to their poor run rate. Kolkata also have 14 points with one game to go while Mumbai Indians have finished the league with 14 points, and their chances of qualification are slim.

After looking in real trouble at one point in the tournament, Bangalore have rallied on the back of some stupendous efforts from their leader Kohli, who has been magnificent in every sense. Kohli has played a pivotal role in the team’s fight back as Bangalore go into the Raipur clash with three wins in a row. Kohli has registered amazing numbers in the series, with an incredible 865 runs in 13 games with as many as four hundreds. He has batted with a split webbing as well, and if he continues in this vein, he could singlehandedly lift Bangalore to the title. 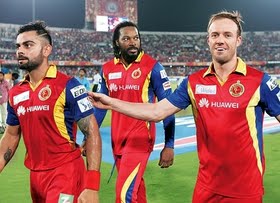 Kohli’s may seem a one-man show, but that isn’t the complete truth. In a number of games, AB de Villiers has matched him stroke for stroke, and in a few, he has outshone his skipper as well, least surprising since he is much more gifted when it comes to strokeplay. Bangalore will be keen for the South African genius to continue his great run as well. The team will also be pleased that Chris Gayle has come back to roaring form just at the right time. The trio, along with Lokesh Rahul, have been responsible for Bangalore putting up some massive scores on the board.

It has been in the bowling that Bangalore suffered badly, especially in the first half of the tournament. Of late Yuzvendra Chahal has found his rhythm to some extent, and has managed to claim 16 wickets thus far. He cannot afford to slip in the crucial game against Delhi though. The veteran all-rounder Shane Watson also has 16 wickets to his credit. However, he has been way too expensive for the team’s liking. The likes of Sreenath Aravind, Stuart Binny and Kane Richardson also have failed to make an impact.

On the other hand, Delhi have been rather inconsistent, but every time they have been in trouble, they have managed to pull things back. Something similar happened against Sunrisers Hyderabad when a special batting effort from Karun Nair took them to a last-ball win, and kept their play-off hopes alive. In the key clash, Delhi will be looking for big efforts from their form men in Quinton de Kock and Nair with the bat, and Zaheer Khan and Amit Mishra with the ball. Chris Morris and Carlos Brathwaite’s all-round skills may also prove handy. In the end though, it may all come down to the Virat Kohli factor.