Gambhir: IPL not about price tag, but about game-changers

Having led Kolkata Knight Riders to two IPL trophies, Gautam Gambhir will now take charge of Delhi Daredevils in the 2018 season. The 36-year-old was purchased by DD for RS 2.8 crore at the auction.

Speaking about leading Delhi, Gambhir was quoted as saying in media reports, “It’s not at all difficult to manage players as it’s the performance that will keep them in the playing XI. And it starts with me. I need to perform to be in that playing XI. And sometimes, it’s not about price tag but about game-changers, who need to be given a longer rope because they can change the game.” 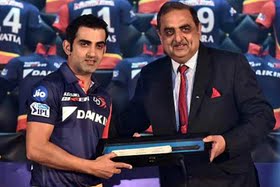 Gambhir went on to add, “It’s not about price tag as it’s not in players’ hand. The only thing in players hand is to perform for the team. That’s what’s going to keep him in the side.”

Asked again about his chances of return to the Indian side, Gambhir explained, “Every year before IPL, I am asked a standard question as to how important the tournament will be for my comeback. You don’t play a tournament eyeing a comeback, you play to win it.”