Rising Pune Supergiants will have their task cut out when they take on a supremely confident Sunrisers Hyderabad in match number 40 of the Indian Premier League.

Rising Pune Supergiants will have their task cut out when they take on a supremely confident Sunrisers Hyderabad in match number 40 of the Indian Premier League. With just three wins in 10 matches, Pune are all but out of the tournament, and will find it difficult to motivate themselves. As for Sunrisers, they have improved in leaps and bounds. No longer solely dependent on David Warner, they have risen to the number two spot rather swiftly. Their recent performances have put them in serious contention for a place in the last four. 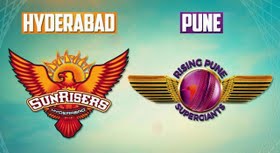 Sunrisers will go into the match against Pune on a real high, having literally mauled defending champions Mumbai in their previous encounter, by 85 runs. They have some seriously in-form batsman as well as bowlers. Leading from the front has been skipper David Warner, who has been in mesmerisingly good form, and is competing with Virat Kohli for top slot among batsmen. After a bad start, the other opener Shikhar Dhawan has also found his groove, as a result of which he finds himself among the top ten highest run-getters so far. In Eoin Morgan and Kane Williamson, they have two other quality batsmen.

Sunrisers continued with their striking performances with the ball as well. Ashish Nehra put up yet another memorable show in the previous game. But, the secret behind the team's success is the continually good efforts of all the pacers. India discard Bhuvneshwar Kumar has won a couple of games for the team with his bowling. Mustafizur Rahman has been literally unplayable. Plus, there is Barinder Sran, who has provided good back up. Yuvraj Singh is free of injury so the team will have high hopes from him. At the same time, there is also Moises Henriques, who has done a reasonable job with bat and ball.

As for Pune, they just haven't got their act together, either with bat or ball. Their only wins in the tournament so far have come against Mumbai Indians, in the IPL opener, Sunrisers Hyderabad and Delhi Daredevils. In the batting department, Ajinkya Rahane has been holding the team together singlehandedly with some classy knocks. But, in the absence of desired support, a number of his quality efforts have been in vain. Pune haven't been helped by injuries to big players like Steven Smith, Faf du Plessis and Kevin Pietersen. They will desperately hope Usman Khawaja and George Bailey can make a difference.

There has been nothing too impressive about Pune's bowling either. Rajat Bhatia has been the best bowler on show. But, while he has been economical to an extent, Bhatia too hasn't been extremely successful. In simple terms, they have lacked wicket-taking bowlers. Albie Morkel has often opened the innings, and has gone for plenty. Ashok Dinda has been good, but only in phases. Irfan Pathan and Ishant Sharma both have been tried out, but have failed to translate their experience into performance. Thisara Perera has been surprisingly decent with the ball, but that says a lot about how poor they have been.