Australia given a Himalayan target of 632 to win Perth Test

It was carnage for the Aussies until midway in the final session with AB de Villiers stroking the ball freely to pile up 169 (from just 184 balls with 21 fours and 3 sixes). This was the first Test century for AB de Villiers as a Wicket Keeper. Hashim Amla who fell few minutes before Tea missed out on a double century when he was caught one handed to his right by Mitchell Johnson off his own bowling. Amla finished with 196 (from 221 balls with 21 fours). 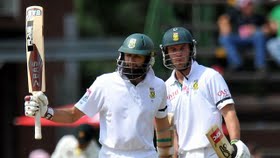 The Aussies did pick up some quick wickets after Amla’s exit with debutant Dean Elgar bagging a pair. Elgar took a painful blow from a short ball from Johnson and the follow up delivery was a full ball onto the stumps to tap him lbw. Faf du Plessis (27) had a rare dismissal when he was forced to edge a bouncing short ball from Johnson to slip.

Mitchell Starc took the last four wickets with Robin Peterson top edging a pull to mid on, AB de Villiers edging a lofted drive overs covers to the keeper, Steyn edging his upper cut to the keeper and lastly Morkel getting yorked. Starc claimed his maiden five-wicket haul. He finished with 6 for 154 in 28.5 overs. South Africa were bowled out for 569 in 111.5 overs while maintaining a tremendous run rate of 5.08. The last five South African wickets fell for the addition of just 31 runs although the pitch seems to be absolutely flat under bright sunshine.

Lunch Report: South Africa has consolidated its position in batting out Australia from the match by stretching its overall lead to 382 runs. It was a flat morning session for the Aussies as Hashim Amla batted right through it to move onto 149* (from 160 balls with 17 fours). South Africa lost just the one wicket in the 28 overs bowled this morning that of Jacques Kallis (37), who was caught at long leg off a top edged hook off Mitchell Starc. Kallis had added 81 runs for the 3rd wicket with Amla.