The city of Mumbai may have produced great cricketers like Sunil Gavaskar, Dilip Vengsarkar and Sachin Tendulkar over the years, but the Wankhede Stadium, situated in the heart of the city, is definitely not a lucky venue for India as far as Test cricket is concerned.

The city of Mumbai may have produced great cricketers like Sunil Gavaskar, Dilip Vengsarkar and Sachin Tendulkar over the years, but the Wankhede Stadium, situated in the heart of the city, is definitely not a lucky venue for India as far as Test cricket is concerned. In 23 games, they have won nine Tests but have also lost seven while the remaining seven matches have been drawn. Since the turn of the millennium, India’s form at the venue has been even more scratchy, with four losses in seven Tests counting the latest defeat against England. Here’s a recap of India’s other losses at Wankhede Stadium since 2000. 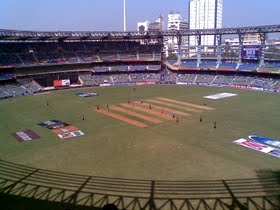 India won the toss and chose to bat first in the game. The match marked the debut of three players – Wasim Jaffer, Murali Kartik and Nicky Boje. It wasn’t a great start for Jaffer in his first match as he was bowled by Allan Donald for 4. The rest of the Indian batting also stumbled barring skipper Sachin Tendulkar, who stood tall with his 97. Ajit Agarkar contributed a useful, unbeaten 41, but India were bowled out for a paltry 225. Kallis picked up three wickets for South Africa while Donald, Pollock and Cronje grabbed two each.

In reply, South Africa were rolled over for 176 with only Gary Kirsten reaching 50. Tendulkar contributed with the ball as well picking up three scalps. Srinath also chipped in with three wickets while Kartik and Kumble claimed two each. India were in with a great chance to outplay the Proteas. Instead, they crumbled to 113 all out, with Pollock getting four wickets and Cronje three. South Africa struggled in reply, but achieved the target of 163 thanks to good contributions by Gibbs, Kallis and Boucher.

This was India’s second successive defeat at the venue, and the first of the historic 2001 series. Australia won the toss and invited India to bat. It proved to be a wise decision as India were cleaned up for 176, with Tendulkar alone contributing 76 of those. Shane Warne picked up four wickets, a rare success for him against India. Australia replied with a strong 349 thanks to contrasting centuries by Matthew Hayden and Adam Gilchrist.

India did not fare any better in their second innings, being bowled out for 219. Tendulkar was again the top scorer with 65, but none of the others could cross 50. Jason Gillespie and Mark Waugh were joint highest wicket-takers for Australia with three wickets each. Australia chased down the target of 47 with ease, winning by 10 wickets.

India won the toss and chose to field first, but England amassed 400 courtesy Andrew Strauss’ ton and Owais Shah’s 88. India replied with a disappointing 279. They got there courtesy Rahul Dravid’s 52 and M S Dhoni’s 64. Pacer James Anderson grabbed four wickets for England. The hosts hit back hard in the second innings, cleaning up England