Throughout this season, Royal Challengers Bangalore have suffered miserably because their bowling have failed to exercise any sort of control on the opposition batsmen.

Throughout this season, Royal Challengers Bangalore have suffered miserably because their bowling have failed to exercise any sort of control on the opposition batsmen. While it is true that T20 is a batsman's game, the bowlers still need to make some sort of impact to keep their team in the hunt. This is exactly what Bangalore have failed to do, and the folly of theirs once again came back to haunt them against Sunrisers Hyderabad on Saturday. Bangalore did give themselves a chance since they were chasing. But the pressure of runs proved to be too much for a strong Bangalore line-up as well, and in the end they fell short.

Yet again, it was Sunrisers captain David Warner, who made the big difference for his team. Warner has been in stupendous form this season, but for the duck in the last match against Rising Pune Supergiants. But, he demonstrated that the failure was a one-off, with a stupendous batting effort against Bangalore. He took on the bowlers with ease, and there was nothing much the Bangalore bowlers could do. The innings also took Warner ahead in the highest run-getters race. His consistency has been amazing throughout this season, and but for him, Sunrisers would definitely have not found themselves in such a decent position.

In the context of the match, Warner's partnership with Kans Williamson was significant. The two came together after Shikhar Dhawan departed early, and strung together a big partnership that put Sunrisers on course for what was to prove a match-winning total. It was the perfect fire and ice combination as Warner struck the big boundaries, and Williamson gave him the strike as much as possible. Warner adapted himself brilliantly to the situations in the game. For the brief while, Bangalore's spinners managed to pull back the run rate, but Warner went deep in his crease, and got the elevation. Towards the end of the partnership, Williamson also opened up, and began finding the boundaries regularly. 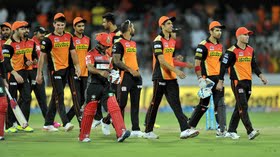 Having conceded a big total, Bangalore needed Virat Kohli to fire again. But, he was due for a low score somewhere, and it came on Saturday. AB de Villiers also wasn't at his best, and although he finished up with a decent score, it had a lot to do with him being dropped twice. Lokesh Rahul proved he has a T20 gear in his kitty with a quick 50. But the Shane Watson run-out was a big blow, as Bangalore could not keep up with the run rate. As mentioned earlier, Bangalore's bowling again stood exposed. Kane Richardson and Varun Aaron conceded plenty and the spinners only did slightly better. Even with constant changes, Bangalore's bowling woes don't seem to end, as they slid further towards the bottom of the table.