Favourites England somehow managed to overcome a fighting New Zealand in a pulsating final that had all the ingredients of a thriller and was completely worthy of a World Cup final.

Favourites England somehow managed to overcome a fighting New Zealand in a pulsating final that had all the ingredients of a thriller and was completely worthy of a World Cup final. After the scores were tied at 241 each, the World Cup final at Lord's went into a Super Over, where the scores were again tied but England won by virtue of hitting more boundaries.

Like in the semi-finals against India, New Zealand managed to put up a competitive total of 241 on the board, with Henry Nicholls making 55 and Tom Latham 47. In response, some excellent bowling saw the Kiwis have England down at 86 for 4. However, some sensational hitting from Ben Stokes (84 not out), and his century stand with Jos Buttler, who made a subdued but crucial 59 from 60 balls, turned around the World Cup final. 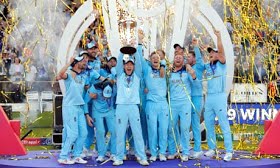 Stokes was declared Man of the match for his brilliant effort, which included combining with Buttler to score 15 in the Super Over. "I’m pretty lost for words. All the hard work that’s gone on in these four years, and to execute with such a good game is unthinkable. Thanks to everyone for all the support. We just kept talking during the partnership with Jos, and the run-rate wasn’t getting away, and in the last over when the ball hit the bat and went for four – I apologize to Kane for that. I definitely wasn’t going to bowl the last over. It’s fantastic, without the lads, the family, and the support, it’s just been incredible.

Kane Williamson was declared Man of the series for his 578 runs and some fantastic captaincy. “It certainly wasn’t one extra run. There were so many moments that could’ve gone either way, but congratulations to England – they’ve had an incredible campaign and they deserve it. The pitches have been different from what was expected. No 300+ totals as expected. The NZ side showed a great amount of heart to get us to this point, but it just wasn’t meant to be. The guys are shattered at the moment – it is devastating. It’s pretty tough to swallow at this stage. But a fantastic effort from our guys.”

Winning captain Eoin Morgan was also all praise for Kane and his team. “There was a lot in that game, jeez. I’d like to commiserate Kane and his team. The fight that they show is worth aspiring to. The example that they lead is hugely commendable to him and his team. It was a very hard-fought game. It was a tough wicket where everyone found it tough to score. We lost a lot of wickets. Buttler and Stokes put together a partnership, and I thought that would take us deep, and it did."

Reflecting on England's biggest cricketing moment in ODIs, he added, "This has been a four-year journey. We have developed a lot over those years, especially the last two. We find it hard to play on wickets like that. To get over the line today means the world to us. I was being cooled down by Liam Plunkett, which isn’t a good sign, we were going up and down like a yo-yo. Some of the support staff and the players, not only the best in our team but in the world, they really helped, quite calming at times.

On the decision to send Stokes back in for the Super Over, Morgan explained, "As long as wasn’t too cooked, I asked Stokes to go for it. Full credit to the two boys who went out for the Super Over, given that they were there most recently. Archer just improves every time he goes out there. Really incredible – everyone in the change room today, and the ones who aren’t here and missed out on the squad – Willey, Billings. I’d like to mention them too.”

Looking back at the devastating defeat, Williamson said, "Both the teams showed a lot of fight. It had to go down to the last ball, and then the last ball of the next little match, but a great match all around. A lot of positives for us as well. It was a shame that the ball hit Stokes’ bat, but I just hope it doesn’t happen in moments like that. Unfortunately, that sort of thing happens from time to time. It’s a part of the game that we play. I don’t wish to nitpick, just hope it never happens in such moments ever again.

Explaining Neesham and Guptill's choice as Super Over openers, he added, "They (Neesham and Guptill) both hit the ball very hard, the left-hand right-hand combination was useful in the Super Over, looking at the short boundary, but it’s unfair to critique a match fought with such small margins – especially the match that we saw today."