Pakistan shock England for a 10-wicket victory in three days!

Pakistan have eased to a 10-wicket victory chasing down the tiny target of 15 in 3.4 overs. It was a superb victory that came in an unexpected fashion by the end of the third day’s play itself as England collapsed in a heap after conceding a first innings lead of 146. Saeed Ajmal who claimed his second 10-wicket haul was the Man of the Match.

England Bowled Out : England have been bundled out for a paltry 160 in their second innings leaving Pakistan with a target of just 15 runs to win the First Test at Dubai! Off spinning magician Saeed Ajmal claimed his second 10-wicket haul as the English second innings folded in just around two sessions! While Saeed Ajmal and left-arm spinner Abdur Rehman picked up three wickets each, the chief destroyer of England today was Umar Gul who picked up four wickets. Umar Gul would have got his fifth wicket as well but for overstepping when he had Graeme Swann plumb infront with a speedy inswinger. 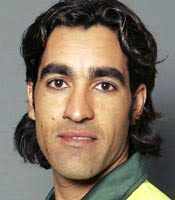 The evening session started with a well set Jonathan Trott (49 from 111 balls with 6 fours) throwing his wicket away with a loose cut shot to a widish away swinger from Umar Gul to get caught behind in the 41st over. In the very next over, Wicket Keeper Matt Prior (4) went back in the crease to Saeed Ajmal to miss a sharp off break which stayed low to have him plumb infront.

Pakistan after removing Trott and Prior had to wait for another 10 overs to find their next breakthrough which came when Stuart Broad (17) slogged Abdur Rehman straight into the hands of long on. The very next ball, Abdur Rehman forced Chris Tremlett to edge him to slip as England faced an innings defeat at 135 for 9. Last man James Anderson with an unbeaten 15 with a six along with the lucky Graeme Swann ensured that England atleast avoided an innings defeat. Graeme Swann (39 from 52 balls with 5 fours and a six) was the last man to be dismissed as his leading edge got caught at covers while trying to play a flick off a Saeed Ajmal doosra. Swann would have perished a long time back but for Umar Gul noballing and missing out on an lbw.

Tea Break Report : England find themselves in the danger of losing the First Test after losing four wickets in the afternoon session! England at Tea at stuttering along at 75 for 5 with still a deficit of 71 runs to clear!

The post lunch session started with Alastair Cook (5) gloving his pull shot to a rising delivery from Umar Gul down the legside to the keeper. Just a few minutes after that, Umar Gul struck again as Kevin Pietersen in an adventurous pull shot top edged the lifter to deep squareleg to depart for an 8-ball duck! Ian Bell managed to avoid a pair but fell cheaply again scoring just 4 after he was hit on the backpad plumb infront of off after being foxed by a Saeed Ajmal doosra.

England seemed to be staging a fightback through Trott and Morgan until left-arm spinner Abdur Rehman provided a breakthrough in the penultimate over before the Tea Break. Eoin Morgan (14) was on the backfoot expecting the ball to turn in to him around off but instead it went straight on with the arm to force a thin edge to the keeper. At Tea, Jonathan Trott is at the crease with a well struck 42* from 88 balls with 6 fours along with Wicket Keeper Matt Prior (0*). England are at 75 for 5 in 35 overs.

Lunch Break Report : England are under pressure at 16 for 1 in 8 overs by Lunch on Day 3 in what is their second innings. There was an early loss in the form of Skipper Andrew Strauss who was wrongly given caught behind down the legside off Umar Gul. It was a delivery that brushed the thighpad on its way to the keeper but Umpire Billy Bowden thought otherwise and even a review couldn’t change that poor decision! England are trailing behind by 130 runs with 9 wickets in hand.

Pakistan bowled out for 338 : England have wrapped up the Pakistani first innings taking around an hour and 15 minutes this morning to capture the final three wickets. Wicket Keeper Adnan Akmal annoyed them with a gritty knock of 61 from 129 balls with 8 fours. The little man was the last man to be dismissed when he stepped out too early to Graeme Swann and was stranded down the legside by a sharp turning off break which had him stumped. Pakistan have settled with a handy lead of 146 runs but on a pitch that looks really flat, this may not be a huge one.

Pakistan have posted 338 batting out as many as 119.5 overs which meant a very slow run rate of 2.82! Amongst the English bowlers, the most successful one was Graeme Swann picked up 4 for 107 while Stuart Broad was the next best with 3 for 84.

Update : Wicket Keeper Adnan Akmal is rallying around with the lower order to help Pakistan stretch their overnight lead past the three figure mark. The little wicket keeper has played some daring shots to keep the scoreboard ticking. England have taken two wickets this morning that of Umar Gul (caught at point driving a full delivery from Broad) and Saeed Ajmal who was wrongly given caught at bat pad off Graeme Swann.

As per the latest scores at the time of publishing this update, Pakistan have moved to 329 for 9 with Adnan Akmal crossing a 2nd Test fifty. The lead has nicely got to 137 runs for the Pakistanis.