It's not the gentleman's game it was: Kapil Dev on ugly scenes following U19 World Cup final

India’s 1983 World Cup-winning skipper Kapil Dev has hit out at Indian and Bangladeshi U19 cricketers for getting involved in the infamous brawl at the end of the hard-fought final which was won by Bangladesh. While a few players from the winning squad were seen showing aggression towards the Indian players, a couple from the losing side are also said to have reciprocated the unruly gesture.

A disappointed Kapil Dev termed the incident ‘horrible’, and also asked BCCI to take strong action against the Indian players involved in the incident. "Who's saying cricket is a gentleman's game? It's not the gentleman's game, it was!" Kapil was quoted as saying at an event, according to a PTI report.

"What happened between those young people I think it was horrible. The cricket boards should take hard steps today so that tomorrow these types of mistakes do not happen. 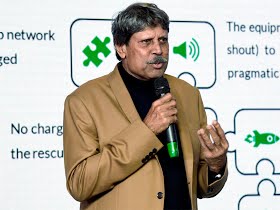 “You lost the match, you have no right to go back to the ground and fight with anybody. Come back. You should give more blame to the captain, manager and the people who were sitting outside. Sometimes, if you are an 18-year-old boy, he doesn't understand. But if you're a manager, that's your responsibility to take care of the situation," the legendary former India all-rounder added in the report.

Another former India captain Mohammad Azharuddin also urged BCCI to take strict action against the erring cricketers. “I would take action against the errant Under 19 players, but I also want to know what role has the support staff played in educating these youngsters. Act now before it is too late. The players have to be disciplined,” Azharuddin was quoted as saying in a report by The Hindu.

“How can you do this? You just keep abusing the opponent right through the game in the name of playing hard. Australians played hard always but without getting personal. We had fast bowlers who did not believe in using cuss words to pump themselves up or upset the batsmen,” recalled Azhar.

Earlier, Bangladesh’s U19 World Cup-winning captain Akbar Ali apologized for the unfortunate incident. “What happened, it should not (have) happened. I don’t know what exactly happened. I didn’t ask what was going on. But, you know, in the final, emotion can come out, and sometimes the boys were getting pumped, and emotions were coming through.

“As a youngster, it shouldn’t happen. In any position, in any manner, we have to show respect to the opponent, we should have respect for the game. Cricket is known for being a gentleman’s game. So I’ll say, I’ll be sorry for my team,” Ali was quoted as saying at the post-match press conference by ESPNCricinfo. “

On the other hand, India captain Priyam Garg had expressed displeasure over the winning side’s behavior. “We were easy. We think it’s part and parcel of the game - you win some and you lose some. But their reaction was dirty. I think it shouldn’t have happened. But it’s okay,” he was quoted as saying in media reports.