Ajinkya Rahane made up for his first-innings failure with a splendid century as India took further command of the second Test at the P Sara Oval in Colombo on Sunday. Rahane, in spite of all the criticism, was again sent into bat at number three on Saturday, but this time he made full use of the opportunity, notching up 126 from 243 balls. He found good support from Murali Vijay, who batted on even as he struggled with what could be a recurrence of his hamstring, and Rohit Sharma, who looked good but did not carry on. Chasing 413, Sri Lanka lost two wickets cheaply, including that of retiring Kumar Sangakkara. 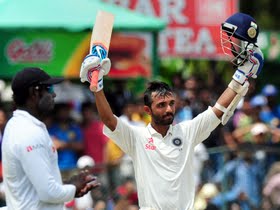 The performance of the day undoubtedly came from Rahane. India resumed the day at a healthy 70 for 1, and in a position of command. But, considering how they faltered in the previous game, Sri Lanka would still have been hopeful. On Saturday, Vijay and Rahane batted with caution because they did not want India to lose the advantage gained. But, the duo was much more fluent on day four. They scored 73 runs off only 93 balls during the morning session to set the ball rolling.

Rahane was very aggressive against the spinners. He used his crease very efficiently to get boundaries off the dangerous Rangana Herath. Vijay also got going early in his innings. He pulled Dushmantha Chameera for a six, and then also hit Tharindu Kaushal over midwicket with the same result. However, as his innings progressed, he started to limp and was having difficulties running singles. On 82, he tried to sweep Kaushal but was adjudged lbw, thus missing out on another hundred. Kaushal also trapped Virat Kohli lbw, as the Indian skipper went across his stumps.

India took it slow after that as lunch approached with Rohit joining Rahane. Post-lunch though they found the going easy. They got singles and twos without much effort, and after Rahane crossed his 100, the boundaries also started flowing regularly. There was a period when four fours came in as many overs delivered by the two spinners – Herath and Kaushal. Rohit fell trying to slog sweep Kaushal for 34. India continued to bat on even as Rahane was eventually out, edging a drive. Wriddhiman Saha came in, retired hurt, and then came back. India eventually declared at 325 for 8.

Chasing 413, India once again struck early, Ravichandran Ashwin getting Kaushal Silva for 1. Silva hit a gentle full toss straight into Stuart Binny’s hands at short midwicket. That brought in Sangakkara, who got his guard of honour one final time. He progressed to 18 without much trouble, but to a ball outside off, he offered a defence, which only resulted in an edge being generated. The catch was taken by Vijay at gully. Dimuth Karunaratne and skipper Angelo Mathews took Lanka to stumps without any further damage. But, they face a daunting task on day five to save the Test.