Putting aside all permutations and combinations, West Indies brutalised their way to the 2016 ICC World T20 crown

Putting aside all permutations and combinations, West Indies brutalised their way to the 2016 ICC World T20 crown, overcoming England at the Eden Gardens in Kolkata on Sunday. There were many teams in contention for the trophy. The tournament began with India as hot favourites, and as the matches progressed, New Zealand and England also jumped into contention with some excellent performances. The teams mentioned above had genuine reasons to believe that they could go all the way. They all come close, but in the end, West Indies were good enough to crush all opponents, and lay their hands on the trophy. They may not have been the most talented bunch in the event, but they definitely were most effective. 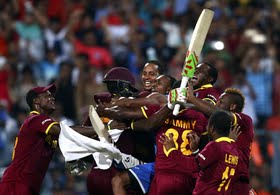 The one factor that separated West Indies from the other sides in the event, and indeed in the final against England, was their brute power-hitting. Throughout the tournament some batsman or the other put his hands up and delivered. In the final on Sunday, the match seemed dead and buried, but Carlos Braithwaite smashed four massive sixes to pull the title from underneath England's grasp. The power hitting defined West Indies in the tournament. It began with Chris Gayle's magnificent hundred against England, followed by Andre Fletcher's blazing knock against Sri Lanka, before the trio of Johnson Charles, Lendl Simmons and Andre Russell doomed India with their muscle-hits in the semi-final at Mumbai.
While power-hitting was the key to West Indians' success in the World T20, a couple of other important factors also need to be taken into account. The performance of Marlon Samuels, though not consistent, was extremely significant. He played three crucial knocks during the course of the event -- the first against England, supporting Gayle, the second versus the Proteas when West Indies stumbled in a small chase, and the final one, on the big day, mixing caution and aggression perfectly to take his team home to the title for the second time in four years. His knock again proved that he is a big-match player.
The contribution of T20 specialist spinner Samuel Badree in the team's victory cannot be underestimated. Throughout the tournament, he was at the batsmen's neck, never allowing them much breathing space. Significantly, he proved to a doubly dangerous weapon as picked big wickets at the top, apart from keeping things quiet. The skipper was more or less assured that with Badree in the team, he could get in four quality overs, which is a significant chunk in T20s. A number of talented batsmen failed to pick him, and Badree's contribution stood out in the semis and the final, where he foxed the likes of Rohit Sharma, Jason Roy and Eoin Morgan.
The biggest plus for West Indies from the 2016 World T20 triumph was that they won the trophy without major contributions from two of their legends, Gayle and Dwayne Bravo. While Gayle began with a bang against England, he did not have anything to show after that. As for Bravo, he displayed glimpses of brilliance, but there was no match-turning performance with either bat or ball. At the conclusion of the World T20, skipper Darren Sammy boasted that there were 15 match-winners in the team. And, while Sammy himself failed to make any sort of impression, his assumption wasn't entirely wrong. Indeed, West Indies found a new match-winner every time they found themselves in trouble.
-- By A Cricket Analyst