IPL 8 28th T20 CSK vs KKR Live Scores, Preview: Chennai Super Kings and Kolkata Knight Riders, two big guns of the IPL, will battle it out against each other at the Chepauk on Tuesday.

Chennai Super Kings and Kolkata Knight Riders, two big guns of the IPL, will battle it out against each other at the Chepauk on Tuesday. On current form, the home side have the definite advantage, but with the erratic Kolkata, you never know what they can deliver on a given day. Thus, it would be foolish to write them off against Chennai even though the latter may seem superior. Having said that if Kolkata do pull off a win against Chennai, it will be some sort of an upset. For that to happen, Kolkata will need to fall back on their past glory, and bring out their best, which led them to beat top sides like Chennai. 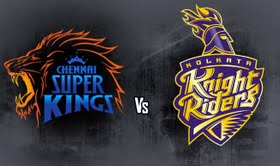 Chennai should be upbeat going into the match having lost just one out of six games, their only defeat coming against a rampant Rajasthan Royals. In their last outing, they defeated the struggling Kings XI Punjab rather comprehensively. Their batting has improved with each game, and in the last match most of their main players fired. Chennai are blessed two rollicking openers in Dwayne Smith and Brendon McCullum, both of whom have flayed opponents consistently. The great start at the top has made it rather easy for the others.

Chennai's middle-order, in itself, has done a great job. Suresh Raina did not begin confidently, but he is quickly getting into his groove. MS Dhoni has also found form after some patchy knocks while Dwayne Bravo and Ravindra Jadeja remain dangerous in the final overs. Chennai's bowling has been top class as well. Ashish Nehra's surge has been surprising, but he has brought all his experience into play. Ishwar Pandey, the other pace bowler Chennai have preferred, has been impressive as well. Two spinners, Ashwin and Jadeja, have done a good job while Bravo has continued to remain crucial as the all-rounder in the team.

In spite of registering three victories in six matches, Kolkata have not been as impressive. Yes, they find themselves in the top half of the points table, but the rained out game against Rajasthan Royals has helped their cause. Kolkata's batting has been inconsistent, with skipper Gautam Gambhir being the only one who has delivered to expectations. Robin Uthappa has been a big disappointment as opener, after the great season last year. They need more from the likes of Yusuf Pathan, Manish Pandey and Suryakumar Yadav. Also, if Andre Russell consistently plays the smashing cameos down the order, it will aid their cause.

KKR have been dealt with a big blow in the bowling department, with Sunil Narine being called for a suspect action again. Although he hasn't been in great bowling form, it is a setback. Thankfully for Kolkata, the others have done exceedingly well. Umesh Yadav and Morne Morkel have consistently claimed wickets while remaining economical. Piyush Chawla has also done a good job as the second spinner. The bowling put Kolkata in a great position against Sunrisers Hyderabad, their last completed match, but the batting let them down.