England ended day one of the third Test against India at Mohali at 268 for 8, deciding to bat first after winning the toss. Here are some interesting stats from the opening day’s play

England ended day one of the third Test against India at Mohali at 268 for 8, deciding to bat first after winning the toss. Here are some interesting stats from the opening day’s play.

Parthiv Patel returned to Test cricket after a really long gap. He last played a Test for India against Sri Lanka in August 2008. 83 Tests were played and 3029 days passed before Patel returned to keep wickets for India at Mohali. This is the most any Indian player has missed between two Tests. Piyush Chawla is next on the list. He missed 49 Tests between April 2008 and his comeback in December 2012. Patel comes back to the list at number three. He missed 43 Tests between October 2004 and August 2008. Arun Lal also missed 40 Tests between January 1983 and February 1987. 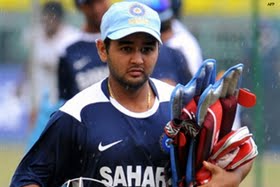 India dropped as many as four catches on the opening day. England skipper Alastair Cook was dropped by Ravindra Jadeja at second slip in the third over. Cook was again dropped, when Ravichandran Ashwin was put down at short-midwicket. Patel then dropped Jonny Bairstow behind the stumps off Ashwin. Had he collected it cleanly, it might have been a stumping chance too. Luckily, Jayant Yadav got him immediately after lbw.

Karun Nair made his Test debut thanks to yet another injury to Lokesh Rahul. Nair thus became the 287th player to play a Test for India. He was given his Test cap from none other than the legendary Sunil Gavaskar. Nair, who made his ODI debut against Zimbabwe earlier this year, has featured in 37 first-class matches and has scored 2845 runs averaging over 252.

While Patel had a mixed day behind the stumps, he did effect two dismissals. Patel took the catch off Ashwin to dismiss Cook for 27. Later, he effected the crucial stumping of Ben Stokes for 29 off Ravindra Jadeja.

Jonny Bairstow’s great year continues. He now has 10 fifty plus scores in a year. This is the joint most by a player at number five or lower. Only two other batsmen have managed this in a calendar year. Shivnarine Chanderpaul achieved the feat in 2002, and Sri Lankan skipper Angelo Mathews in 2014.

Ashwin dismissed Cook for the sixth time in his Test career on Saturday. This is the most any spinner has dismissed the England captain in the format. Australian off-spinner Nathan Lyon is next on the list. He has got Cook out on five occasions so far.

Bairstow is averaging a brilliant 184 against spinners in the series. He was dismissed for the first time in the series by a spinner, by Jayant Yadav. On the other hand, he has scored 38 runs against fast bowlers while being dismissed twice.

Jos Buttler scored 43 runs on his Test comeback. This is his highest Test score since July 2015. He managed only 156 runs in his 12 previous innings, with a highest of 42 before being dropped.