Yuzvendra Chahal’s shocker: Series whitewash not something too serious to ponder over

Having lost the ODI series 0-2 following defeats at Hamilton and Auckland, India was clean swept by New Zealand as the hosts completed a hat-trick of victories with a five-wicket triumph

Having lost the ODI series 0-2 following defeats at Hamilton and Auckland, India was clean swept by New Zealand as the hosts completed a hat-trick of victories with a five-wicket triumph at Mount Maunganui. The whitewash on Tuesday was India’s first in a series of three or more matches in 31 years.

Batting first, India posted a competitive 296 runs on the board courtesy a fine 112 from the in-form KL Rahul. Shreyas Iyer chipped in with another half-century, contributing 62 from 63, while Manish Pandey made a fluent 42 from 48. Mayank Agarwal (1) and Virat Kohli (9) continued their poor run as India struggled to get off to a good start. Prithvi Shaw (40) gave his wicket away with an unnecessary run out as India stumbled to 62 for 3.

New Zealand was never in any sort of trouble during the chase. Openers Martin Guptill (66) and Henry Nicholls (80) added 106 for the opening wicket. It needed a Shane Warne-type delivery from Yuzvendra Chahal to Guptill to see the back of the experienced opener. While the in-form Ross Taylor and skipper Kane Williamson fell cheaply, Colin de Grandhomme roared back to form with a blazing 58 not out from 28 balls to lift the Kiwis to a comprehensive triumph. 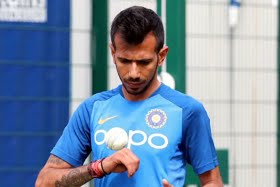 Despite the 0-3 thrashing, leg-spinner Chahal stated that too much should not be read into the defeat as India has been winning quite frequently in the ODIs. "Overall, if you see it is just the fourth or fifth series loss in the last 4-5 years. The other team is also here to play. You cannot win every match. We have won one series, lost the other, so it is not something too serious to ponder over," Chahal said, rather shockingly, after India’s abject surrender.

The leg-spinner admitted that India’s fielding in the series was rather poor, but added that too is something which can be worked upon and improved. "They (New Zealand) have played quite extraordinarily in this series. So we need to appreciate that. Poor fielding happens at times. Once in 10 series it happens, we have time until the next ODI series. We have seen what are the shortcomings and we have enough time to work on it before the next series," Chahal commented.

Chahal praised KL Rahul and Shreyas Iyer, both of whom impressed in the series even as the other batsmen came short. "You can see the confidence in them. They are 25-26 years old and batting with maturity. They understand the situation well. It is not easy to bat in the middle overs especially when the spinners are bowling. Rahul has also batted up the order at times. So, it shows the maturity that he knows what the team needs," the leg-spinner further stated.

On the youngsters who struggled, Chahal said it will be a good learning experience from them. "Prithvi Shaw and Mayank Agarwal came into the side, so youngsters got to play outside India. It is not easy to play in New Zealand. But overall if we see, it is just an ODI series. We did win the T20 series 5-0, the first time, that's a positive for us as well," added Chahal.

It may be recalled that, following the defeat at Auckland, Indian captain Kohli had bizarrely stated, "ODIs aren't too relevant this year compared to Tests and T20s, but to find people who can play that way under pressure is a big revelation for us and a big plus.”