Kohli, Pujara’s success the biggest gains for India from Jo’burg

India would be dishonest if they do not admit that there is a tinge of disappointment in the camp after they could not bowl out the South Africans on day five of the Wanderers Test, having set them a mammoth 458.

India would be dishonest if they do not admit that there is a tinge of disappointment in the camp after they could not bowl out the South Africans on day five of the Wanderers Test, having set them a mammoth 458. It was a fifth day pitch that had enough for the bowlers, and India had the arsenal to go for a win. Still, if they were told at the start of the Test that they would end up drawing it, they would have been pretty pleased considering the lack of match practice they had going into the Test. 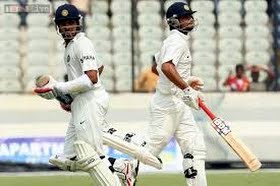 If you take away the result, there were plenty of reasons for India to be pleased with their efforts. Remember this was their first Test on away soil against a top team since the twin disasters in England and Australia. Many had predicted a 2-0 rout for MS Dhoni’s especially considering the lack of experience in the squad while playing in South African conditions. Impressively enough, India showed plenty of character with both bat and ball, and in fact dominated the Test for a good part of four days, before South Africa held their own on the final day.

Among the many gains for India were the performances of Virat Kohli and Cheteshwar Pujara. Remember, these two youngsters are filling in the boots of two legends – Rahul Dravid and Sachin Tendulkar, and what a wonderful performance they came up with. Speaking of Kohli first, there were question marks over his technique going into the Test series. His mode of dismissals in the two one-dayers also raised the worries. But Kohli showed tremendous adjustment, particularly considering the fact that he was playing his first Test in South Africa.

Kohli had got a hundred in Adelaide before, but Johannesburg was an equally big challenge, and the new India number four showed that he was up to it. To stand up to Dale Steyn, Morne Morkel and Vernon Philander on a pitch that was assisting their kind of bowling was something special. Kohli showed patience in great measure, and his shot selection in both innings, until he was dismissed, was impeccable. Pujara was expected to do well, considering his technique, but the question was whether he had the temperament to stand up to the quality bowling. Pujara answered the queries in incredible fashion, and his long second-innings vigil was chiefly responsible for putting India in a great fashion.

Apart from Pujara and Kohli, India’s pace bowlers also made their mark. Ishant Sharma proved that he still has it in him to perform at the highest level picking up some big scalps, and keeping India in the hunt for most part. Consistency is what will be expected of him as India head to Durban. There were question marks over comeback man Zaheer Khan, but he answered his critics with a sterling first-innings effort. A word of praise for Ajinkya Rahane as well. He batted with resolve in the first innings, but his two run-outs were equally significant in India holding on to draw the game.