There was nothing surprising about Cheteshwar Pujara’s brilliant hundred on day three of the Johannesburg Test, which put India in a commanding position.

There was nothing surprising about Cheteshwar Pujara’s brilliant hundred on day three of the Johannesburg Test, which put India in a commanding position. Those who have seen him in domestic cricket over the years, and even in his short stint in the international arena, are well aware of the capabilities of the man. Still, the latest hundred he got against South Africa will remain the most important of his Test career, just like the Adelaide hundred during India’s disastrous tour to Australia in 2011-12 will always remain special for Virat Kohli. 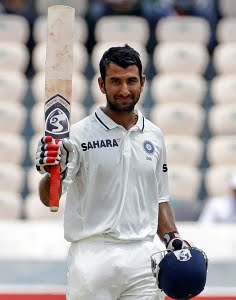 Pujara’s Test record in his short career speaks for itself – five hundreds in 15 Tests before the start of the Jo’burg Test. But, what the stats don’t show is that all five of those tons came in India – 159 at Hyderabad, 206 not out at Ahmedabad, 135 at Mumbai, 204 at Hyderabad and 113 at Mumbai. These are impressive figures no doubt, but a player is rated very highly in international cricket only when he succeeds away from home. This is why Pujara’s maiden hundred away from home is so crucial to his Test career. People now know that, like Kohli, Pujara is also one for the long run.

Patience is Pujara’s greatest asset, and he has shown this virtue of his in abundance in the ongoing Test. Even in the first innings, Pujara was looking in complete control of his innings, until that unfortunate mix-up cut short what could have been a big innings. Like all hungry batsmen though Pujara ensured that he did not mess up the chance a second time round. Pujara came into bat under a lot of pressure, with the South African pacers on top having sent back Shikhar Dhawan early, and keeping the runs down to a premium.

The pressure situation actually brought out the best in Pujara. His main job was to ensure that India did not lose any further wickets that could trigger a collapse. Significantly, he got good support from Murali Vijay, but it was Pujara who has actually set up the Test nicely for India. In many ways, it was the perfect Test knock. When the pressure was on, Pujara kept the bowlers at bay. Leaving the ball outside the off-stump is one of his biggest strengths, and he held the Indian innings together with his perseverance. Except for that return catch that was put down, he hardly committed a flaw during the knock.

At the end of the day, Test cricket is also about scoring runs, and this is another area in which Pujara displayed his versatility. Once the new ball lost its sheen, and Pujara settled in nicely, he saw to it that the run rate was raised dramatically. Of course, he was helped by the fact that South Africa’s best bowler Morne Morkel got badly injured, and having the positive Virat Kohli at the other end also aided his cause. Still, one can take nothing away from the manner in which Pujara batted, putting a price tag on his wicket, exactly what is expected of a number three batsman.