England's all-round cricket at its best in years

Following the thrashing of Sri Lanka, England will go into the series against Pakistan on a high. England were completely dominant over Sri Lanka across formats, be it the Tests, ODIs or T20s

Following the thrashing of Sri Lanka, England will go into the series against Pakistan on a high. England were completely dominant over Sri Lanka across formats, be it the Tests, ODIs or T20s. Although England were playing at home, their performance was still highly impressive. They will look to continue their great form against the Pakistanis as well. The current England team is in great shape, and it is fascinating to view the Englishmen play such a refreshing brand of cricket, especially after their dull run in the 90s and the first half of 2000. Pakistan will have their task cut out for sure.

What has stood out about England over the last year or so has been the confidence which their players have exhibited. There are different teams for different formats, and each have their own match-winners who are putting their hands up. In Tests, James Anderson and Stuart Broad are arguably the best opening bowling combination among the top teams today. They have won matches consistently for the team over the years, and at least one of the two bowlers have come up with game-changing efforts in a given Test. This is one of the key reasons behind England picking up 20 wickets to win matches. Anderson and Broad will go down in history as one of England's best.

Looking at dynamic match-winners, they have one in Joe Root across all formats. A supremely gifted player, it is no co-incidence that his rise has been in tandem in England's improving fortunes. Even when England were playing poorly, Root kept performing consistently for the team. And now that the team's fortunes have risen, they are reaping the benefits of Root's glorious run. With Nick Compton having failed at number three against Sri Lanka, there is every possibility of Root moving up to the critical number three position against Pakistan. That will be a deserved promotion for Root is best suited in the team to anchor the ship out in the middle.

Alex Hales is another talent who has risen incredibly against the Lankans. He had a horrific initiation to Test cricket, and there were genuine question marks over his ability in the longer format of the game. But, considering the lack of options, England decided to stick with Hales, and he delivered against the Lankans. The great part was that the opener continued his great run in the one-dayers as well. Speaking of openers, Jason Roy was brilliant in the one-dayers, and his rise augurs very well for England. With Alastair Cook approaching the end of his career, it wouldn't be a bad idea to try out both Hales and Roy as openers in the Tests. 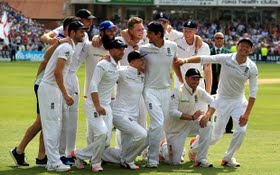 Considering the success of newly-inducted players, England have been bolstered to include more fresh faces against Pakistan for the upcoming series. Toby Roland-Jones has been picked as a seamer in the squad following his impressive county efforts while Jake Ball has been retained in spite of not being given a chance against Sri Lanka. At least one of the two could make their debut against Pakistan, with James Anderson and Ben Stokes unavailable due to injury. The England selectors have also given another chance to Gary Ballance, which is a sure-shot sign that the think-tank is backing the team players they believe are good enough.