Indian captain Virat Kohli, who is currently on a break from international cricket, turns 31 today, November 5. Unarguably the greatest batsman

Indian captain Virat Kohli, who is currently on a break from international cricket, turns 31 today, November 5. Unarguably the greatest batsman of the current decade along with Steve Smith, Kohli had a memorable series at home against South Africa, where he notched up his Test-best score of 254 not out. The 3-0 triumph also saw India creating a new record under Kohli, winning 11 consecutive Test series’ at home.

As Kohli turns a year older, here’s a look at 10 incredible records of the Indian skipper over the years.

1.Kohli is the first batsman to score 20,000 international runs in a decade. He achieved the feat during India’s tour to West Indies in 2019 during the course of his 114 not out in the third ODI.

2.Kohli is the fastest to reach 10,000 ODI runs. He did so in 2018 when he slammed an unbeaten 157 against West Indies. Kohli reached the landmark in 205 innings, surpassing Sachin Tendulkar who got there in 259. 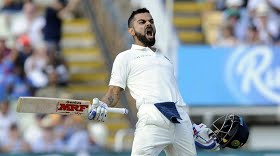 3.Kohli is the only cricketer to win all ICC annual individual awards in one year. For his stupendous performance in 2018, Kohli was awarded the Sir Garfield Sobers Trophy, ICC Test and the ODI Player of the Year.

6.Kohli has scored the most double centuries scored by an Indian Test player. He has seven to his credit. Virender Sehwag and Sachin Tendulkar recorded seven each.

7.Kohli has the most 150-plus scores as captain in Test cricket. He has done so nine times, overtaking Sir Donald Bradman, who scored eight as Test captain.

9.In the recently concluded Test series against South Africa, Kohli surpassed Mohammad Azharuddin as the Indian captain to enforce the follow-on most number of times. Kohli has enforced the follow-on eight times, Azharuddin had done it 7 times.

10.The Indian skipper holds the record for scoring the most number of hundreds in a calendar year. Kohli slammed 11 centuries in 2017. The earlier record was in the name of Ricky Ponting and Graeme Smith, who had scored nine each in a year.