Chennai Super Kings batted like Champs to clinch a high scoring thriller against Rajasthan Royals tonight at Chepauk. Shane Watson who scored the first century of IPL 6 saw his efforts go in vain as CSK pulled off a run chase of 186 with a ball to spare.

Chennai Super Kings batted like Champs to clinch a high scoring thriller against Rajasthan Royals tonight at Chepauk. Shane Watson who scored the first century of IPL 6 saw his efforts go in vain as CSK pulled off a run chase of 186 with a ball to spare. Dwayne Bravo sealed the CSK victory by smacking Watson for a six over deep covers mid way in the final over from which the hosts needed 11 runs.

Rajasthan Royals got a superb start of 71 for the first wicket in 7.2 overs out of which Rahane scored just 16 runs. It was a Shane Watson show all through as the Aussie power hitter finally brought up the first century of this IPL which no other batsman could score in the 29 games preceding this. Watson scored 101 from 61 balls with 6 fours and 6 sixes. Stuart Binny complemented him with a 22-ball 36 to finish off the innings in style. Despite Watson’s carnage, R Ashwin managed to produce respectable figures of 4-0-20-2. 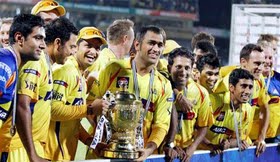 CSK did not panic despite the target being very high. Like always, Michael Hussey held the innings together and almost stayed the distance. Unfortunately the left hander got run out after closing on towards a century in the 17th over. Hussey scored 88 from 51 balls with 13 fours and a six. Suresh Raina played his part of sustaining the momentum with his 35-ball 51 which came with 4 fours and 2 sixes. Skipper MS Dhoni scored 21 from 16 balls before he was caught brilliantly by Stuart Binny under pressure with the equation at 11 from 7 balls.

Dwayne Bravo kept his cool to finish the match with an unbeaten 9-ball 15. For the visitors, left-armer James Faulkner bowled well for his 4-0-20-3. Michael Hussey was given the Man of the Match award ahead of centurion Watson. With this win, CSK are topping the table with 5 wins from 7 matches.

Toss and Teams: Rajasthan Royals have won the toss and decided to bat first against hosts Chennai Super Kings at the MA Chidambaram Stadium in Chepauk.