BAN vs PAK 1st Test Day 3: Hafeez 224 as Pakistan pile on the agony

BAN vs PAK 1st Test Live Scores: Continuing from where he left off on day 2, Mohammad Hafeez went on to register a sublime double century to take his team into a position of supreme command at the end of day three.

Continuing from where he left off on day 2, Mohammad Hafeez went on to register a sublime double century to take his team into a position of supreme command at the end of day three. Never looking in any sort of trouble at all against the mediocre Bangladesh bowling on a slow surface, Hafeez eased his way to 224, as Pakistan ended the day on a strong 537 for 5, a significant lead of 205 with five wickets remaining. Pakistan's objective on day four would be rather simple now, build as big a lead as possible so that they do not have to bat a second time round. With the kind of position they are in, an innings victory seems like a definite possibility. 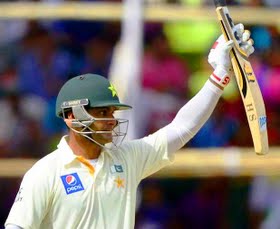 The hero of the day was undoubtedly Hafeez. He displayed a lot of hunger to carry on in spite of having crossed the three-figure mark the day before. Twice in the recent past, Hafeez has been dismissed in the 190s. Expectedly then, he was very cautious this time as he got into that danger zone. He spent a number of balls on 190, and after labouring his way to 198, he was stuck there as well for a while. The much-anticipated moment for him finally came when he paddle swept Taijul Islam for a couple. The celebrations were restrained, and understandably so. After all, this was Bangladesh, who had beaten them 3-0 in the one-dayers.

Even after crossing the double hundred mark, Hafeez did not give his wicket away. He kept building partnerships and moving the ball around. Only when the loose balls were on offer did he really go after the bowling. In the end, his dismissal was rather anti-climatic. After never looking like getting out, he gloved a delivery from Shuvagata Hom into the hands of leg gully. His innings thus ended on 224, a knock which came off 332 balls during which he hit 23 fours and 3 sixes as well. By the time, he departed, he had put Pakistan in complete command as they were already 80 runs ahead.

Even as Hafeez was undoubtedly the standout performer of the day, there were numerous supporting acts that aided Hafeez and the team on the day. Azhar Ali who was the overnight batsman with Hafeez got to 83 without much trouble, and looked set for an easy hundred, when Hom hurried one through Ali's defence and sent him on his way. Younis Khan helped Hafeez in another half-century stand, but on 33, a lazy push saw his stumps being undone by Taijul. Pakistan continued to agonise Bangladesh though. Skipper Misbah-ul-Haq made a resolute 59 while Asad Shafiq and Sarfraz Ahmed remained unbeaten on identical scores -- 51. The latter's runs came off just 54 balls.

As the scoreboard suggests, the bowlers were completely pulverized. Unlike in the ODIs, the lack of experience and quality in the bowling was evident in Bangladesh's attack. Neither their pacers nor their spinners could make any sort of impact on the Pakistan batsmen. Islam and Hom were among the wickets, but they came at a cost, both conceding over 100 runs. The experienced Shakib Al Hasan was even more disappointing. He conceded 122 runs without claiming a scalp. Rubel Hossain and Mohammad Shahid were economical at best. Bangladesh tried out eight bowlers, but not to much avail.