Tribute: Zaheer Khan, a fine fast bowler who got better with age

In 2000, with the match-fixing saga still fresh in people's minds, many die-hard Indian cricket fans pulled out as supporters of the team they once backed through thick and thin.

In 2000, with the match-fixing saga still fresh in people's minds, many die-hard Indian cricket fans pulled out as supporters of the team they once backed through thick and thin. Then, there was another bunch of ardent fans who were seeking for something novel to distract them from the disturbing developments. Sourav Ganguly had taken over captaincy that year after Sachin Tendulkar refused the same. Under his tutelage, two raw, young talents came to the fore, and both made their first impression in the same match during the Champions Trophy -- one was Yuvraj Singh, who smashed Australia all over the park, and the other was Zaheer Khan, who famously worked Adam Gilchrist and Steve Waugh, and rocked the Aussies. 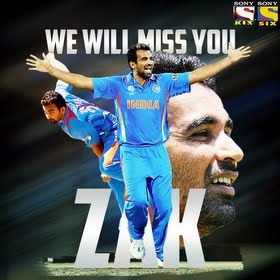 A star was born that day at Nairobi. Fifteen years later, he walked away from the game he loved. Unlike the much talked about entry, the exit was a rather calm one -- no farewell match, no lifting on the shoulders by his teammates and no heart-warming speeches as well. Like many of his famous former teammates, Zaheer too deserved a send-off, but it wasn't to be. It was a dignified exit nonetheless, and perhaps the kind Zaheer would have opted for even if he was in the team. The veteran left-arm seamer was never one to play for the gallery, in spite of possessing all the ingredients of being a crowd-puller.

Even though relatively shy, Zaheer had an envious female fan following. During a Test match some years back, a young lady appeared on the big screen holding the placard -- Zaheer, I want to marry you. An intense cricket match had to be halted briefly as the batsmen out in the middle could not control their chuckle. And, when the camera zoomed into Zaheer, he gave the expression of a 'nervous groom'. That was the loveable nature of Zaheer, which the ladies were attracted to. He was unlike the typical fast bowler, who spat out a dictionary full of expletives at the batsmen. He was more in the Curtley Ambrose mould -- happy with a stare. But, Zaheer knew how to get the job done.

The retired fast bowler's career can be broken down into two parts -- his rollicking entry followed by the somewhat mandatory slump that every Indian fast bowler goes through, and then the comeback, which made Zaheer a doubly dangerous bowler. After that day in Nairobi that Zaheer when announced himself to international cricket with two yorkers, he continued to be a tearaway fast bowler for the next couple of years. He effort in the 2001 Galle Test, where he claimed seven wickets, remains among the finest efforts by a fast bowler in the island nation. But, playing day in and day out took a toll on his body, and he eventually found himself out of the side.

Great players are known to convert setbacks into opportunities. And Zaheer was no different. Instead of sulking, he took the forced break to head to England and play county cricket in 2006. When he returned to the Indian side a year later, Zaheer was a completely different bowler, and for good. He had shortened his run-up, and lengthened his skills. It was no surprise that Zaheer was the star performer as India won the Test series in England after two decades, in 2007. He became a master exponent of reverse swing, and greats like Graeme Smith and Kumar Sangakkara struggled to pick which way the ball was going. The last few years were no great, marred by injuries and subsequent poor form. But, it can be safely concluded that Zaheer left cricket as a better bowler than what he was when he entered.