Toss: Mumbai have won the toss and elected to bat first 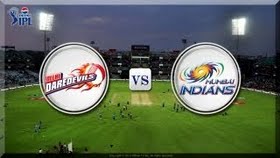 Sehwag is the Man of the Match 'The winds of change blew towards Delhi. We were focused on staying fit and practising hard. The decision to open with Mahela clicked and it showed that he led from the front. If I bat well, I try to control my innings. Sir Viv Richards told me to overcome my fear and believe in myself.'


Mahela: 'Great effort by the boys. Showed a lot of character after losing 6 games. Viru batted really well, it was good to watch from the non striker's end. We have to try and control what we can control. We cannot think about what the media is saying and that's what we did. We can still improve. 160 was a good score but we needed a good start and we got that. Both of us enjoyed batting on that wicket.'

R Ponting: 'I'm not sure what happened! 161 was going to be a pretty competitive total. But we didn't have any answers, especially in the first 6 overs. They got the momentum and they ran away with it. We thought if we could take a couple of wickets after the first 6 overs, we could come back but their opening stand was too good. We've lost 2 in a row but we know that things can change quickly. The ball didn't swing, Johnson's weapon is to get the ball in to the right hander. So that's why we left him out. We also wanted Smith to open'

Delhi Daredevils have lost eight IPL games in a row. If they lose to Mumbai Indians, they will move to joint-second (with Kolkata Knight Riders and Kings XI Punjab) on the list of longest losing streaks in the IPL. Pune Warriors top the list with 11.

Kieron Pollard is four catches short of 100 T20 catches. When he gets there, he'll be only the second player to do so behind David Hussey.