Yuvraj Singh’s success vindicates selectors stand to bring him back

When Yuvraj Singh was recalled to Indian team for the England series, sceptics said, the selectors had taken a step backward. At 35, in fact, many felt that Yuvraj really did not have much to offer

When Yuvraj Singh was recalled to Indian team for the England series, sceptics said, the selectors had taken a step backward. At 35, in fact, many felt that Yuvraj really did not have much to offer. But, with a fantastic hundred at Cuttack in the second ODI, Yuvraj not only silenced his critics, but brought back fond memories of his days of yore. It was typically flamboyant knock, with strokes all round the ground. However, the celebrations were not as grand as before. Of course, there was a lot of emotion. But, for a man who had beaten cancer, this was still a humane achievement.

Yuvraj’s successful comeback has vindicated the faith shown in him by the Indian think-tank. When queried about India’s decision to recall Yuvraj this late in his career, Indian skipper Virat Kohli had explained prior to the series that the move was taken to ease burden on MS Dhoni.

"We cannot leave so much burden on MS alone in the middle order,” Kohli had said on the eve of the first ODI against England in Pune. "I am willing to take responsibility up the order, but there needs to be one more guy with him down the order in case the top order doesn't fire." 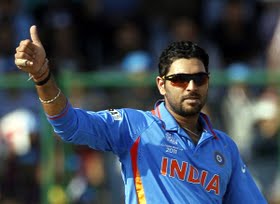 If the top order doesn't fire, you are left with MS alone and he is guiding the youngsters more often than not, which is fine if you have 15-20 games till a big tournament. When you have only three games, you need to make sure the guys who have been picked are in good form. That's why I said we brought in Yuvi, to have the best batting combination possible, and Yuvi has had a very good first-class season. This just gives the team much more balance in the middle and lower-middle order with MS and Yuvi," Kohli stated.

And Kohli proved to be exactly right as Yuvraj indeed eased the burden on Dhoni at Cuttack, as both went on to smash memorable hundreds. Post the victory in the second ODI, Kohli reiterated that was exactly what they team was hoping for them. "We were wondering if we had a good start were we would have ended up. It wasn't good batting early on. Two of the greats (Dhoni and Yuvraj) stood up, that is what the team management envisioned,” said Kohli after India’s win in the second match.

Kohli also deserves credit for Yuvraj’s comeback, with the latter himself admitting that Kohli’s faith in him stopped him from retiring. "It feels great; it's been a while since I got a hundred. I came back after recovering from cancer. First two three years were hard. I had to really work hard on my fitness, I was in and out of the team, I was not able to get a permanent spot and there was a time when I thought whether I should continue or not," Yuvraj said at the post-match press conference.

"Self-confidence is always there when you have the backing of the team and captain. I think Virat has showed a lot of trust in me and it was very important for me that people in the dressing room trust me. There was a time when I was wondering whether to continue or not to continue. I think a lot of people have helped me throughout this journey. So, never giving up is my theory. So I never gave up, kept working hard. I knew times will change," Yuvraj added.