Having been hammered by Sunrisers Hyderabad in their previous encounter, Mumbai Indians will seek improvement as they take on hosts Royal Challengers Bangalore in match number 41 of the Indian Premier League (IPL) at the Chinnaswamy stadium on Wednesday.

Having been hammered by Sunrisers Hyderabad in their previous encounter, Mumbai Indians will seek improvement as they take on hosts Royal Challengers Bangalore in match number 41 of the Indian Premier League (IPL) at the Chinnaswamy stadium on Wednesday. The embarrassing loss against Hyderabad has put Mumbai in a precarious position. They will need to try and win most matches from here on, and should also look to improve their run rate. Despite recent victories, the latest being the one run escape against Kings XI Punjab, RCB find themselves in the lower half of the points table, and need to continue winning.

The big problem with Mumbai this season has been that they haven't found the desired consistency. They were always known to be poor starters, but have shown a tendency to improve as time wears on. This season, that hasn't been the case. Rohit Sharma has led from the front for them, but most of his good knocks have come in chases, and in games that he has failed, Mumbai have struggled in a big way. Parthiv Patel and Ambati Rayudu have also done well with the bat. But, Mumbai will be expecting more from them as well as big-hitters like Jos Buttler and Kieron Pollard.

As for their bowling, they have been consistent without being outstanding. Mitchell McClenaghan has impressed with his accuracy, and has been rewarded accordingly. Mumbai will expect him to carry on with the good work. Among others, Tim Southee has done a reasonable job although Mumbai will be expecting more wickets from him. Harbhajan Singh has used his experience to good effect, but again he has been doing a restrictive role. The Pandya brothers -- Krunal and Hardik -- both have done a decent job with the ball, but it will help if they show a bit more consistency.

In spite of the win against Punjab, Bangalore would be worried with their constantly suffering bowling attack. If not for Shane Watson's brilliance with the ball, they might have failed to eke out the one-run win they eventually managed against Murali Vijay's men. Watson was very accurate at the death, and his skills with bat and ball remain central to the team's fortunes. At the same time, while Yuzvendra Chahal has definitely shown improvements, the form of Varun Aaron and Stuart Binny in a big worry. The experiment with Chris Jordan failed in the last match, but he definitely deserves another chance. 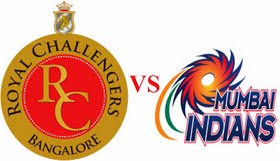 With the bat, Bangalore have continued to excel. Virat Kohli had a rare failure in the last match, but AB de Villiers more than made up for him with a splendid innings. Lokesh Rahul has replaced Chris Gayle at the top of the order, which shows how fine a form he has been in. Watson and Sarfaraz Khan have contributed well for the team will spanking cameos. Sachin Baby may not have played outstanding knocks, but he has featured in a couple of crucial partnerships during the course of the tournament. As always, Bangalore would be hoping that their batting is good enough to overcome their bowling flaws.