After being thrashed in the Pune match, India fought back well to level the T20 series at Ranchi with a comprehensive 69-run victory

After being thrashed in the Pune match, India fought back well to level the T20 series at Ranchi with a comprehensive 69-run victory. Dinesh Chandimal called correctly at MS Dhoni’s home ground, but to the surprise of most, elected to field first. India thus got the best use of the batting conditions, and smashed an imposing 196 in their 20 overs. Shikhar Dhawan led the way with a blistering fifty, his maiden T20 half-century while Hardik Pandya and Suresh Raina played breezy cameos. Ashish Nehra and Ravichandran Ashwin then ensured that there were no hiccups with the ball as India registered a commanding triumph.

It was Dhawan who led the way for India with the bat. He came out all guns blazing, and ended up with a smashing 51 from only 25 balls. The southpaw began on an attacking note, taking on last match’s hero Kasun Rajitha at the very start. Dhawan did not mind going down the pitch and smashing the fast bowlers and was also impressive with his driving, and running between the wickets as well. In all, Dhawan smashed seven fours and two sixes, and by the time he guided Dushmantha Chameera to the keeper, India had raced away to 75 in seven overs. 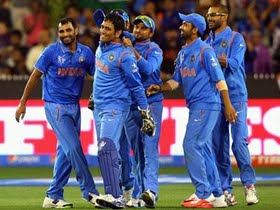 In contrast to Dhawan, Rohit Sharma was more subdued. The fact that Dhawan was going on an all-out attack did help. But, Rohit also seemed conscious of not losing his wicket. Following Dhawan’s dismissal, India slowed down a bit as Rohit and Ajinkya Rahane could not get the big hits. Sri Lanka fought back courtesy Chameera, who foxed Rohit with a slower one, and took a brilliant catch to send back the opener for an uncharacteristic 43 from 36 balls. Rahane followed him in the next over as a swipe across the line against Sachithra Senanayake went straight up in the air.

At 127 for 3 in the 15th over, India seemed to be losing their way. But, MS Dhoni’s decision to promote the young Pandya turned the tide back in the hosts’ favour. The rookie smashed a couple of big sixes using the long handle to good effect, and his 27 from 12 took India closer to 200. Raina also contributed a breezy 30 from 19 before falling the next ball after Pandya. This brought Yuvraj Singh to the crease, and he became Thisara Perera’s hat-trick victim as a loft down the ground wasn’t connected. The late wickets kept India to 196.

Chasing an imposing target, Sri Lanka needed Tillakaratne Dilshan to come out all guns blazing. Instead, he was stumped off the first ball he faced; Ravichandran Ashwin getting one past him, and Dhoni effecting a lightning stumping. Nehra, at the other end, dismissed Danushka Gunathilaka and Seekuge Prasanna with short of the length deliveries. At 16 for 3, the match was all but over for the Lankans. Dinesh Chandimal (31), Chamara Kapudegera (32) and Milinda Siriwardana (28 not out) delayed the inevitable while Dasun Shanaka enjoyed himself with some big hits. India clearly had better reasons to cheer though.