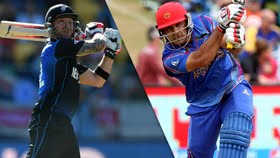 Expect it to be flat, as usual, at McLean Park. They are using the same surface as for the Pakistan-UAE contest so there will be some additional wear. Pakistan helped themselves to 339 without ever really breaking sweat, although Afghanistan's attack should provide more of a challenge. The forecast is for a warm, sunny day in the Hawkes Bay region..

These two teams have never met in international cricket

New Zealand's highest total in their own country has come on this ground - 372 for 8 against Zimbabwe - while their previous outing here, against Pakistan, saw them amass 369 for 5.