Faf du Plessis: It was special performance by Ngidi

"It took a lot of hard work over the last five days. We were on top pretty much most of the times," he said.

"It was one of the harder Tests, given it was tough to pick wickets. After Day 1, we were very disappointed. In that last 45 minutes, we gave India a sniff but we made sure we showed character over the last four days," the skipper added. 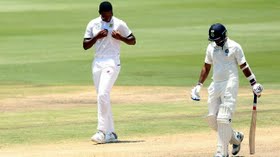 Admitting they were short in the first innings, he further stated, “We needed to get 400 but for me the vital time was the second innings. We kept pushing and we knew anything over 250 would be challenging."

The South African skipper also special praised debutant fast bowler Lungi Ngidi, who took 6/39 to dismantle India in the second innings and win the man of the match.

"It was special performance by Ngidi. He's a great guy and we welcome him into the team. I look at the person's personality and he's a wonderful human being," du Plessis said.