Virat Kohli once again sizzled for the Indians but couldn’t carry his fight right till the end. Kohli scored a brilliant 78 from 65 balls with 7 fours and 2 sixes. India’s Skipper MS Dhoni scratched around hoping to take it to the wire but got out at the wrong moment after a 44-ball 56 with 7 fours and a six. Ravindra Jadeja at no.7 found it beyond him to take India home and like the tail surrendered with little fight.

The visitors had an ordinary opening start with Shikhar Dhawan falling in the 8th over cleaned up by a Southee yorker while Rohit Sharma was caught behind off the same bowler in the 10th over. India had scored only 37 on the board when it lost the second wicket which simply put tremendous pressure on the rest of the batsmen. 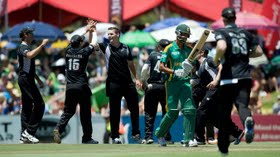 Tim Southee captured four wickets although he was taken for 72 runs in his 9 overs. Corey J Anderson also took the stick but managed to take three wickets which included the crucial ones of Dhoni and Jadeja. The pick of the Kiwi bowlers was Mitchell McClenaghan who bowled short and quick to strangle the Indian batsmen. The Man of the Match award went to Kane Williamson for setting up the Kiwis for a good total.

New Zealand Innings: New Zealand look to be favourites to go 2-0 up at Hamilton as India face a stiff target of 297 from just 42 overs. The Second ODI has seen two rain interruptions and the weather looks to have cleared after the completion of the Kiwi innings.

The Kiwis piled up 271 for 7 in 42 overs with Corey J Anderson taking the Indian bowlers to the cleaners with a cameo of 44 from just 17 balls. Five of those 17 balls disappeared for sixes from the big man. Ross Taylor chipped in with a 56-ball 54 with 7 fours while Kane Williamson was the chief architect of the Kiwi innings with 77 (from 87 balls with 5 fours and a six).

Mohammed Shami struck early to have Jesse Ryder (20) caught behind in the 6th over to a short ball outside off. Martin Guptill found some form to add 89 runs for the 2nd wicket before he got out top edging a sweep off Suresh Raina on 44 (from 65 balls). Kane Williamson batted superbly and got out after the second break, stumped out off a lovely turning delivery from Ravindra Jadeja.

The Indian bowlers were bludgeoned by Anderson but the last 2-3 overs were really good for them as Shami, Ishant and Bhuvneshwar hit the blockhole consistently.

Toss and Teams: India have won the toss and have decided to bowl first in the Second ODI at the Seddon Park in Hamilton. The visitors have kept faith in the same XI that had lost the first ODI by 24 runs. New Zealand have made one change with Kyle Mills replacing the injured Adam Milne.

The weather for this game isn’t promising with rain expected to come into play in the second half. The pitch on the other is likely to be on the slower side and could take turn.