England won the Second T20I against Australia at Durham to draw the 2-match T20I Series 1-1. The hosts won comfortably by 27 runs in a high-scoring contest at the Riverside Ground in Chester-le-Street.

England won the Second T20I against Australia at Durham to draw the 2-match T20I Series 1-1. The hosts won comfortably by 27 runs in a high-scoring contest at the Riverside Ground in Chester-le-Street.

Asked to bat first after losing the toss, England thanks to opener Alex Hales posted a high total of 195 for 5. Hales unfortunately missed out on a T20I hundred for the second time in his career. The 24-year-old had previously scored 99 against West Indies and in this game fell short of three figures by six runs. Hales’ 94 came in 61 balls with 11 fours and 2 sixes while batting 19.1 overs. 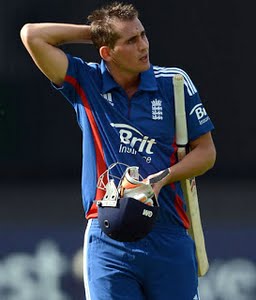 Hales had a fabulous opening start with Michael Lumb of 111 in 11.2 overs. The left-handed Lumb scored 43 from 27 balls with 6 fours and a six. Luke Wright with 30 from 18 balls and Eoin Morgan with 20 from 11 balls helped Hales to sustain the momentum. Leggie Fawad Ahmed playing his second T20I was the pick of the bowlers for the visitors taking 3 for 25 in his 4 overs.

Australia were going quite well in their run chase until a well set David Warner got out after scoring a 42-ball 53 (with 5 fours and 3 sixes) in the 13th over. Skipper George Bailey (23 from 13 balls) and Glenn Maxwell (27 from 16 balls) threatened a while but their efforts were reduced to mere cameos. Australia ended up with 168 for 9 with Jade Dernbach applying the brakes with 3 for 23. Left-arm spinner Danny Briggs took 2 for 25.