Kings XI Punjab kept their winning streak intact by defeating Kolkata Knight Riders in a low-scoring contest on a greenish pitch at Abu Dhabi. This is now the fourth win in as many matches so far for the Kings XI Punjab in IPL 7.

Kings XI Punjab kept their winning streak intact by defeating Kolkata Knight Riders in a low-scoring contest on a greenish pitch at Abu Dhabi. This is now the fourth win in as many matches so far for the Kings XI Punjab in IPL 7.

Known for chasing down big targets, Kings XI Punjab today showed that its bowling unit can successfully defend a modest total of 132. Young swing bowler Sandeep Sharma bowled beautifully for KXIP taking 3 for 21 in 4 overs. Left-arm spinner Akshar Patel gave away only 16 runs off his four overs besides the big wicket of Chris Lynn. 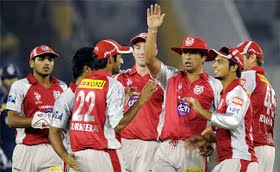 All the five bowlers used by Kings XI Punjab got amongst the wickets and bowled on a tight leash to have Kolkata Knight Riders all out for 109 in 18.2 overs. The struggling KKR Captain Gautam Gambhir who came into this match with three ducks in a row just managed to open his account with a single before getting caught at mid off.

But for an impressive cameo of 34 from 17 by Suryakumar Yadav, KKR wouldn’t even have crossed the 100-run mark. Sandeep Sharma got the Man of the Match for his magical spell.

Earlier, KKR bowled exceedingly well to keep the explosive KXIP batting line-up down to 132 for 9. Virender Sehwag was the top scorer with 37 from 30 balls. The key moment of the Kings XI Punjab was Glenn Maxwell getting his leg stump cleaned up by Morne Morkel after scoring 15 from 12 balls.

Sunil Narine was outstanding as usual bagging 3 for 24. Piyush Chawla was the surprise as his leg breaks and googlies got him rich figures of 3 for 19 in four overs. Chawla’s prized wickets were that of David Miller followed up by that of Bailey, Sehwag in the space of three balls in the 14th over.

Toss and Teams: Kolkata Knight Riders won the toss and asked Kings XI Punjab to bat first at the Sheik Zayed Stadium in Abu Dhabi. KKR have got in Piyush Chawla for R Vinay Kumar. Kings XI Punjab have gone in with the same team.