Not just about hitting, important to read the game: Pandya

Hardik Pandya’s promotion to number four for the Indore ODI against Australia on Sunday worked perfectly as he smashed 78 from 72 balls to lead India to a series win.

The move was suggested by coach Ravi Shastri. Asked about his experience of batting higher up the order, he said, "It does not make any difference where I bat. Rather than seeing this as a challenge, I see this as an opportunity to do something nice for the team. When I was told I was going to go out to bat next, I was happy. This is the first time I played so many balls, so it was great."

Asked about the secret of his success, Pandya explained, "I just back myself, and in cricket, the confidence always matters and I'm confident that I can clear the ground," he said. "It's not just about hitting. It's pretty important that I read the game," he added. 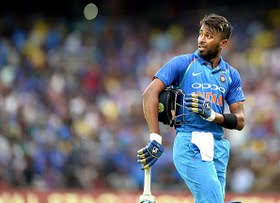 With the focus shifting towards the 2019 World Cup, Pandya’s form is key. "I don't think that much. I focus only on the things which I can focus and right now I'm just playing my cricket. I just back myself and if you back yourself, you always come out on top. I mean you can't score everyday but yeah, backing yourself is pretty important,” Pandya explained of his growing status.