Shaun Marsh and Matt Renshaw hit hard fought fifties to help Australia inch ahead of India on an attritional day of cricket on Sunday, the second day of the Bengaluru Test.

Resuming the day at 40 for no loss, Australia fought to finish on an impressive 237 for six, a significant lead of 48 on a tough surface, responding to India’s 189.

The day ended with wicketkeeper batsman Matthew Wade unbeaten on 25 and all-rounder Mitchell Starc not out on 14. India fought hard, giving away only 197 in the day, but could not pick up more than six wickets.

India began the day hoping off-spinner Ravichandran Ashwin could do a Nathan Lyon. The offie was successful in spinning one sharply to get David Warner's off-stump pegged back for 33. 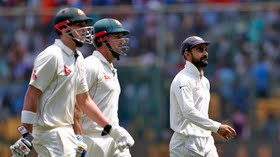 Buoyed by the breakthrough, India came hard at Matt Renshaw and Steve Smith. The Aussie skipper battled hard in defence, but was eventually consumed by the pitch as one from Ravindra Jadeja reared off a length, and took the edge.

The young Renshaw however kept the fight alive, and went on to complete his third fifty in Test. He hit Jadeja for the first six of the match, over long-off. A couple of balls later though Renshaw fell to the same bowler for 60 as he got one to spin past the well-set batsman.

Jadeja claimed his third wicket when he had Peter Handscomb for 16, Ashwin taking a juggling catch at mid-wicket. But, Marsh ensured Australia finished the day with the upper hand.

Marsh made the most of his luck. He ahd edged Umesh Yadav to wicketkeeper Wriddhiman Saha on 14, but India did not review the not out verdict. Later, Marsh was given leg before to Umesh on 44, but the left-hander got the decision overturned.

Marsh finally fell for 66, but only after adding a crucial 57 for the sixth wicket with Wade.