The controversy in the ongoing India-Australia series refuses to end. The latest being an Australian newspaper accusing both Indian captain Virat Kohli and coach Anil Kumble of unacceptable behaviour during the second Test

The controversy in the ongoing India-Australia series refuses to end. The latest being an Australian newspaper accusing both Indian captain Virat Kohli and coach Anil Kumble of unacceptable behaviour during the second Test in Bengaluru.

"Kohli might be the aggressor in the brazen campaign India is running against Australia's integrity - even striking an Australian official with an orange Gatorade bottle - but coach Kumble, one of the main instigators of the Monkeygate fiasco, would appear to have reclaimed his role as the puppeteer behind the scenes," the report said.

"It's understood Kumble has also made his fury known about the actions of match referee Chris Broad during the Test, complaints which are now to be passed onto the ICC by the BCCI," the report added. 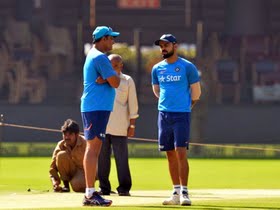 "Kohli was also seen swearing in the direction of the Australian box as he left the field and using a throat-slitting gesture to send-off Peter Handscomb late in the Test. The spirit of the game notion has been pronounced dead in the game many times before, but Kohli - a law unto himself - would appear to have killed it off once again with his behaviour some of the worst by an international captain since villainous Sri Lankan leader Arjuna Ranatunga," the report further alleged.

"By not taking action against Kohli for his behaviour on and off the field in Bangalore, the ICC has virtually given a green light for complete anarchy to break out in Test cricket," the paper went on to add.