Was surprised when sent into bat at number five in World Cup semis: Dinesh Karthik

Dinesh Karthik, who was a member of India's 2019 World Cup squad and was discarded immediately after India were knocked out of the tournament, has revealed that he was surprised when sent into bat at number five in the semis against New Zealand at Manchester.

Karthik came into the middle with India having crumbled to five for three in the fourth over. He struggled against the moving ball managing only 6 from 25 before mistiming one off Matt Henry and putting India in further trouble. Chasing 240, India went on to lose the semis by 18 runs despite half-centuries from Ravindra Jadeja and MS Dhoni. 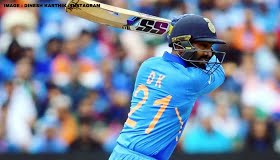 Looking back, Karthik revealed that he was initially supposed to bat at number seven, but in the wake of too many wickets falling, he was sent in ahead of Dhoni to try and stop the barrage of wickets. Dhoni eventually walked in with India's score at 71 for 5, following Rishabh Pant's dismissal for 32.

“It came as a bit of a surprise (batting at five) because they had made it very clear that I would be batting at number seven. We had to send a rear-guard action just to stem the flow of wickets. I was told to pad up and it all happened in a daze, in a hurry,” Karthik was quoted as saying in Cricbuzz.

Karthik also admitted what the press had always maintained all along, that the players knew at the back of their minds that there was a disaster in the offing if the top-order crumbles. Rohit Sharma, Virat Kohli, KL Rahul and Shikhar Dhawan (against Australia) had a good run in the tournament, but it all fell apart in a matter of a few minutes at Manchester.

“There were many games when a lot of the middle order didn’t even get to bat. It was a hard thing because someone like Dhoni likes to play an x number of balls in a tournament especially leading up to the semi-final. It could be hard in that tournament,” he stated.

Dhoni (50) and Jadeja (77) featured in a 116-run stand for the seventh wicket. However, neither could take India over the line. Dhoni was brilliantly run out by Martin Guptill while Jadeja fell going for a big one against Trent Boult. Earlier, half-centuries from skipper Kane Williamson and Ross Taylor helped New Zealand recover from a slow start to post 239 for 8, a total that proved well beyond India's reach.