Rohit Sharma celebrated his 100th T20I with a fantastic inning as India squared the three-match series against Bangladesh at Rajkot. Chasing a middling target of 154

Rohit Sharma celebrated his 100th T20I with a fantastic inning as India squared the three-match series against Bangladesh at Rajkot. Chasing a middling target of 154, Rohit slammed six fours and an equal number of sixes in his rollicking 85 from 43 balls as India won the contest by a comprehensive margin of eight wickets.

Rohit was the dominant partner in an opening stand of 118 with Shikhar Dhawan, who contributed a sedate 31 from 27 balls. He began by taking on Mustafizur Rahman, hitting him for two fours and a six in the 4th over of the innings. The Indian skipper raced to his fifty off just 23 balls and looked set for a hundred in his 100th match when he mistimed a stroke off Aminul Islam and was caught at deep midwicket.

The highpoint of Rohit’s innings was hitting off-spinner Mosaddek Hossain for three sixes in an over between long-on and mid-wicket. This even as the bowler attempted a negative line, coming round the wicket. At the other end, Dhawan was dismissed in the 11th over as he missed an almighty heave against Aminul Islam, and was clean bowled. Shreyas Iyer (24 from 13) and KL Rahul (8 from 11) completed the winning formalities with 4.3 overs to spare. 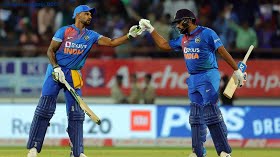 Earlier in the day, Yuzvendra Chahal (2 for 28) led India’s fightback after Bangladesh openers Liton Das (29) and Mohammad Naim (36) gave the visitors an impressive start, adding 60 for the first wicket. Chahal dismissed danger-man Mushfiqur Rahim for 4, having him caught in the deep, and then sent back a well set Soumya Sarkar, stumped for 30, as Bangladesh stumbled to 103 for 4 in the 13th over.

Chahal was unlucky not to have dismissed Das earlier in the innings. The leg-spinner drew the opener out of the crease, and all Rishabh Pant had to do was take off the bails, but he collected the ball in front of the stumps, and hence the delivery was declared a no-ball. Das was also dropped on 26 by Rohit at square-leg, owing to a mix-up between him, Shivam Dube and Pant. The struggling wicket-keeper soon made amends by running out Das with a direct hit in the eighth over.

Deepak Chahar (1/25) and off-spinner Washington Sundar (1/25) kept things tight for India. However, Khaleel Ahmed (1/44) continued to struggle. Naim hit him for three successive boundaries, and Ahmed could never recover from that point. After Bangladesh lost wickets in a heap, skipper Mahmudullah’s 30 from 21 took the team past 150. With Rohit in roaring form though, the Bangla Tigers were silenced.