Rohit Sharma played a fantastic knock under pressure at Melbourne

WC 2015 IND vs Ban: In spite of the fact that Bangladesh beat India in the 2007 World Cup at Port of Spain, India were still expected to overcome the Bangladeshis this time round since not only were they in form

In spite of the fact that Bangladesh beat India in the 2007 World Cup at Port of Spain, India were still expected to overcome the Bangladeshis this time round since not only were they in form, but had a much superior side in comparison to 2007. And, India did not let their fans down, coming up with a fantastic all-round show to seal their place in the semis. Bangladesh had their moments, particularly in the first 30 overs of the game, but they allowed India to recover in the second half and, after that, there was no looking back for Team India. 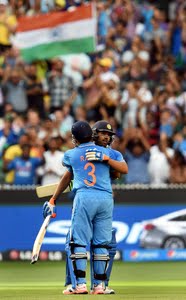 Going into the quarter-final clash at Melbourne, the form of Rohit Sharma was one of the major worries for India. But, the India opener grabbed his opportunity with both hands on Thursday, and came up with a wonderful ton under pressure. It was a much-needed innings as far as Rohit and India were concerned, and the Mumbai boy delivered the goods at the right time. After a bright start India had lost Shikhar Dhawan, Virat Kohli and Ajinkya Rahane cheaply. Rohit held the innings together and ensured that there was no repeat of 2007 this time round.

The most impressive aspect of Rohit’s knock on the day was the responsibility with which he batted. Rohit is not known for someone who can bide his time, and build a knock. On a number of occasions in this series he has faltered playing some poor strokes early on in the innings. Against Bangladesh, he reined himself in, and built an innings that took India towards an imposing total. Even after getting past his hundred, Rohit continued batting till the 47th over, which did not allow Bangladesh to break through. The contribution of Suresh Raina was also significant. For the second game in a row, he batted with maturity to bail India out of pressure.

India’s bowling has been one of their strong points even since the World Cup has kicked off, and they were relentless yet again. The Indian pace trio have taken turns in playing the lead role, which has been another standout aspect of their game. This time, it was Umesh Yadav’s turn to play the stellar role in the bowling department. He got the important wicket of Tamim Iqbal at the top of the innings, came back to claim crucial wickets in the middle of the innings, and never allowed Bangladesh at chance at having a go at the target. Mohammed Shami was impressive yet again while Ravichandran Ashwin kept things quiet.

India may have claimed an easy win at the end of the day, but Bangladesh were certainly competitive in the first half. Shakib Al Hasan, Rubel Hossain and Taskin Ahmed combined to have India three down with just over a 100 on the board. But, they could not apply the pressure till the end. Yes, they were unlucky with a couple of decisions, but once India recovered Bangladesh wilted under pressure. Bangladesh’ performance with the ball in the last 15 overs was particularly poor. And, once they lost early wickets, they were never in it.