Got to react to whatever is thrown in front of you: Bairstow after semis-sealing hundred

Having gotten the better of India in the previous game, hosts England continued their grand comeback and booked a place for themselves in the semis with a convincing 119-run victory over New Zealand.

Batting first, England posted 305 thanks to another century from Jonny Bairstow and a fifty from the other opener Jason Roy. In response, New Zealand were never in the hunt, losing wickets regularly, with Tom Latham's half-century being the only innings of note. 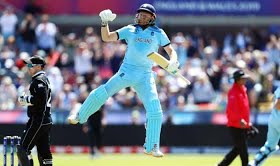 Man of the man Bairstow, who slammed his second consecutive hundred, becoming the first Englishman to do so in the World Cup, played down his achievement saying he was just doing his job.

"Really pleased with my form, I am just doing what I'm supposed to do and nothing extraordinary. We knew these were must-win games, the performances in a couple of games hadn't been quite up to scratch. To play the way we have in the last two games and hopefully in the semis.. is pleasing," Bairstow said in the post-match presentation.

Speaking about his successful opening partnership with Roy, who has crossed fifty in both matches since comeback from injury, Bairstow added, "I think batting with Jason for a period of time helps. You understand each other's games and moods."

Bairstow was happy England could fight back when put under pressure and showed great determination to reach the semis. "You got to just react to whatever is thrown in front of you. We applied ourselves pretty well. We knew it was a must-win game and New Zealand is a class side, so we needed to put in a performance today, and we're pleased to do that after a tough few weeks.

"It's going to be important for us to go away and refresh. There is bound to be a bit of soreness, especially after two gruelling games. So, a couple of days off, a few days to get away and rest up before the semis. Hopefully we will put in good enough performances in the remaining two games and hopefully win them," he went on to admit.

Losing skipper Kane Williamson admitted it is not ideal to lose three games in a row. "It's a simple road ahead but not easy. We have to be a lot more competitive than we have been in the last few games. It's important to learn from our mistakes moving forward. They got the best of the conditions, but they were the better team. Their bowlers put us under pressure from the start so full credit to England," conceded Williamson.