WI vs ENG 2nd Test match report: On the second day of the second Test between England and West Indies, which was marred by rain and poor weather conditions, England gained a slight edge as they kept the Windies to a run under 300 in spite of a Marlon Samuels century

On the second day of the second Test between England and West Indies, which was marred by rain and poor weather conditions, England gained a slight edge as they kept the Windies to a run under 300 in spite of a Marlon Samuels century. More significantly, they did not lose a single wicket with the bat. England's openers Alastair Cook and Jonathan Trott batted with purpose to register what was England's best opening stand in a year and a half. Cook was unbeaten on 37 and Trott on 32 as England finished on a confident 74 for no loss after 26 overs at Grenada. 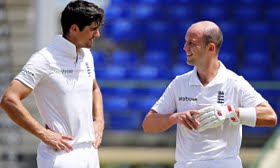 Earlier, West Indies resumes their innings on 188 for 5, on what was going to be another frustrating stop start day owing to the weather. Marlon Samuels, who was unbeaten on 94 overnight, did not look in great touch at the start, and consumed plenty of balls for his early runs. Rain interruptions did not help his cause, and increased his frustration, as he looked to add to his small tally of Test hundreds. He seemed hell bent on reaching the three-figure mark, but after another of those weather delays, his patience ran out, and he swiped at one to complete his hundred, leading to celebrations.

Having reached his hundred, he did not last long though, falling to Anderson going for another of his wild strokes. While Samuels batted well for his 103, his dismissal did not help his team's cause, as it left them in trouble at 223 for 6. Ramdin battled hard for his 31, which consumed 80 balls. But, he fell to the guile of Stuart Broad, who had him caught behind. At the other end, Jason Holder, who had scored a ton in the last game, carried on from where he left off in the first Test. He hit a couple of brisk boundaries, but like Ramdin he too was caught behind off Broad's bowling.

Like it has often happened with West Indies, they crumbled from a decent position to a disappointing 247 for 9. Thankfully, the last wicket pair of Devendra Bishoo and Shannon Gabriel held up England. They made merry with a few boundaries, and had fun, before Moeen Ali ended their resistance by trapping Bishoo lbw for 30. Windies' innings of ended on 299, with Broad claiming 4 for 61. West Indies had some momentum going, but the partnership between Cook and Trott, put England ahead again.