Having thrashed Zimbabwe by nine wickets in the opening one-dayer on Saturday, India will be looking to seal the three-match series when they face the hosts in the second match at Harare on Monday

Having thrashed Zimbabwe by nine wickets in the opening one-dayer on Saturday, India will be looking to seal the three-match series when they face the hosts in the second match at Harare on Monday. India went into the series as favourites, and did their reputation little harm with a brilliant nine-wicket win against Zimbabwe. The visitors will be seeking an equally emphatic victory when they go into the second match against the under-confident hosts. Even though they are playing a weakened side, anything less than a series whitewash would be considered a disappointing performance from India, and MS Dhoni would know that.

A series like the one against Zimbabwe gives youngsters an opportunities to make a mark, and Lokesh Rahul grabbed it with both hands in the first match. Although India weren’t facing a stiff target, Rahul still batted very well to reach a hundred on ODI debut. It was memorable effort that will surely be etched in his memory forever. If Rahul can continue to score big in the rest of the matches as well, the Indian selectors would be forced to try and keep him in the one-day squad even when Shikhar Dhawan and Rohit Sharma are back in the team. 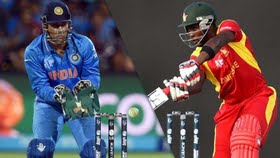 Ambati Rayudu also batted with composure in the match, to give Rahul company in the 162-run stand. Although Rayudu has been in and out of the side, he actually averages a healthy 48 with two hundreds. Rayudu will like to carry on his good work, so that the selectors would find it difficult to ignore him for long. Rayudu has played a lot of his games against Zimbabwe, so he has good experience of the conditions. As such, it shouldn’t be surprising that he has an impressive record against them. He must improve his strike rate though.

While India won the first ODI impressively, Karun Nair failed on debut. He will like to make an impact in the second match. With so many new faces in the squad, Nair cannot afford too many failures. Among the others batsmen, Manish Pandey and Kedar Jadhav did not get a hit in the first match, so they would be keen to spend some time out in the middle. Skipper MS Dhoni himself would also like to get some runs under his bat. He is under a bit of pressure with people calling for Virat Kohli to take over as skipper in all formats.

In the bowling as well, India will take in lot of positives from the first game. Jasprit Bumrah was superb in the first match finishing with four wickets. Barinder Sran and Dhawal Kulkarni did well at the start of the match, picking up a couple of wickets each. Yuzvendra Chahal also had it easy on debut, finishing with 1 for 27 from 10 overs, while Axar Patel also chipped in with 1 for 26. India will be keen to claim the series with a win in the second match itself on Monday.